The formula of NeuroMorph, rich in caffeine, provides a feeling of focus and a maximum increase in alertness throughout the day. A modern nootropic formula improves the ability to remember, strengthens cognitive functions and promotes vitality. It perfectly reduces the level of cortisol in the body, thanks to which it reduces stress and allows you to relax during the day.

Alpinia galanga extract - the plant belongs to the ginger family, has a protective effect on the gastric mucosa. Exotic plant extract perfectly improves the lipid profile. It stabilizes the level of cholesterol and triglycerides.

Lion's Mane extract - lion's mane. It has been used as a natural nootropic for centuries. Especially widespread in China, where it was used to increase cognitive functions, improve mood and alleviate symptoms of memory loss. Lion's Mane Mushroom increases nerve growth factor production. The peptide promotes the growth of brain tissues, including dendrites.

NooGandha - is a new form of organic ashwagandha. This ingredient improves focus, uses liposome delivery technology. By binding the ingredient with phospholipids to increase bioavailability and absorption rate. Lipids also cross the blood-brain barrier, which makes it more digestible than the regular form of Ashwaganda. A medicinal plant used in traditional eastern medicine; It is called Indian ginseng because of its adaptogenic properties, i.e. increasing the body's resistance to stress factors, stabilizing the mood and regulating the functioning of the immune system.

Caffeine InnovaTea - a patented form of caffeine affects the blocking of adenosine receptors in the brain, which reduces the feeling of fatigue during training. Due to its thermogenic effect, it effectively burns fat and improves metabolism.

Inositol - is a natural compound necessary for the proper functioning of our body. It improves the mood, regulates the endocrine system, lowers the level of bad cholesterol and stimulates the regeneration of all tissues of our body. In addition, it is essential for the proper functioning of the reproductive system of men and women, which is why it is sometimes called the "fertility vitamin".

Spectra - a patented blend of powdered fruit and vegetables that support the functioning of the immune system and have an antioxidant effect. They fight oxidative stress by reducing damage at the cellular level.

Marigold extract - marigold extract is one of the richest sources of carotenoids, compounds with antioxidant and anti-cancer properties. The most important of this group of dyes are lutein and zexanthin, widely used in ophthalmic diagnostics.

Black pepper extract - the active ingredient of black pepper, has a thermogenic effect. It can increase the blood supply to the digestive system tissues, resulting in better digestibility of food ingredients. It significantly improves the bioavailability of many active ingredients of supplements.

1 scoop before mental effort, depending on the needs. 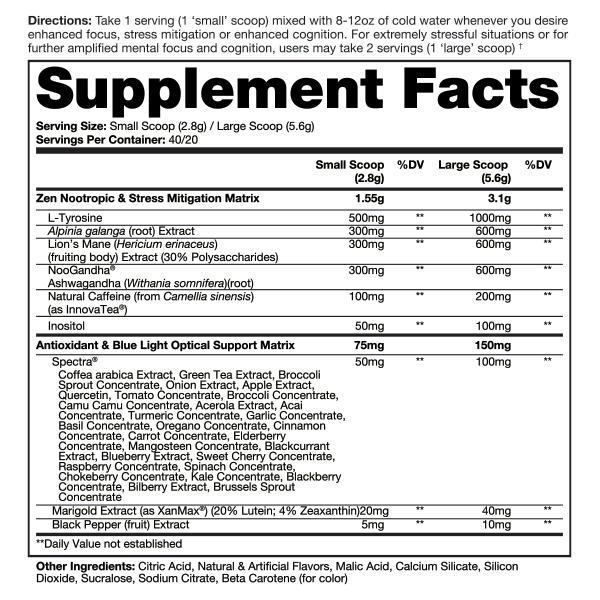