The supplement also contains the addition of adaptogens that will provide you with a powerful dose of energy and focus during the day. The manufacturer used extracted CO2 extract, non-GMO, vegan and 100% organic CBD + CBG oil. The unique formula provides the amazing benefits of CBD (high mental comfort, peace) and CBG (increased energy and alertness). This combination is an energy boost to action and full concentration during work or mental effort.

Contains the addition of slow-release caffeine in the ZumXR formula, which provides increased physical energy and reduces the feeling of fatigue. The use of the Morning Capsules supplement also contains the amino acid L-tyrosine - known for its properties to improve concentration during mental work or study. The addition of terpenes ensures better performance and increases cognitive functions. Turmeric extract with strong anti-inflammatory properties strengthens immunity and has a positive effect on the condition of the joints.

Rhodiola Rosea plant belongs to the group of adaptogens, i.e. plants that help the body adapt to high mental and physical stress. Its main action is to relieve fatigue, improve concentration and improve mood. All this translates into better results both at the gym, as well as at work or school.

Turmeric Curcumin - protects the circulatory system in many directions, acting directly on the cause of systemic disorders. It demonstrates antioxidant activity through the ability to neutralize free oxygen radicals and peroxides, inhibit the peroxidation of lipids and low-density lipoproteins (LDL), thus preventing the formation of atherosclerotic lesions. In addition, it improves the production of PGI2 prostacyclin, which inhibits the clumping (aggregation) of platelets, has a diastolic effect on blood vessels and lowers blood pressure. Curcumin contained in Morning Capsules as one of the bioactive ingredients of turmeric, inhibits degenerative processes in the joints through a pronounced anti-inflammatory effect, which is of particular importance for people struggling with rheumatism or degenerative changes in the locomotor system, as well as sports injuries.

Morning Capsules is a combination of high-quality hemp extract and the purest CBD, CBG, with the addition of a selected range of terpenes. The full spectrum supplement contains a minimum of 900 mg of CBD per bottle. The raw material for the production of the supplement is high-quality fibrous hemp from farms without the use of pesticides and other plant protection products. Terpenes are aromatic oils that give each variety of cannabis its characteristic flavor and aroma. They are produced in the so-called trichomes - the resin glands found on cannabis flowers. They show a relaxing effect and increase concentration.

2 capsules daily with a meal. 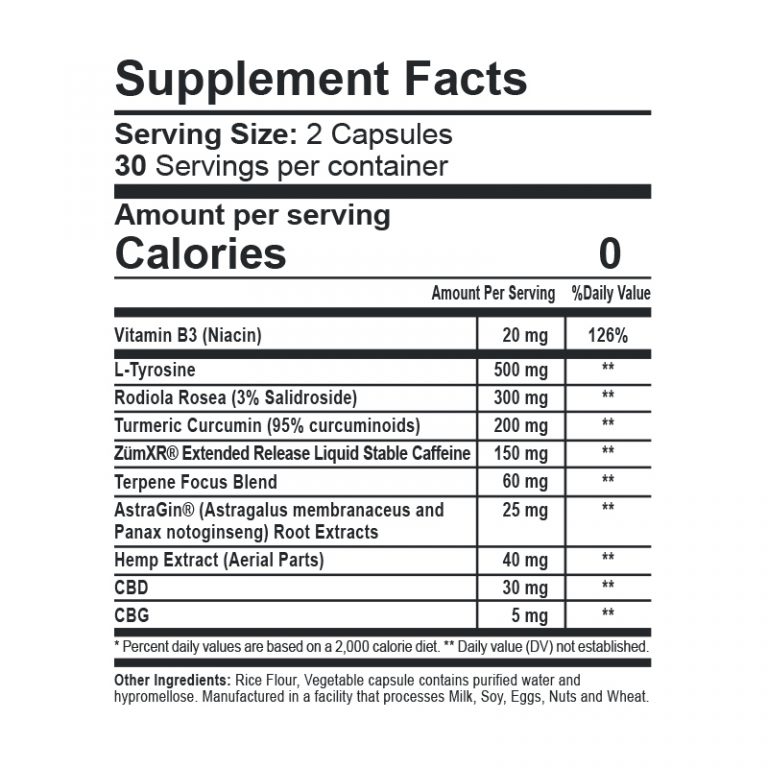