N-Acetyl-L-Tyrosin - acetylated derivative of the L-tyrosine amino acid. Ordinary L-tyrosine is less stable and also less soluble in water, which can lead to reduced bioavailability. N-acetyl-L-tyrosine supports brain function by supporting the synthesis of norepinephrine catecholamines and dopamine (neurotransmitters). N-Acetyl Tyrosine helps in the proper functioning of the nervous system, helps maintain normal psychological functions and contributes to the reduction of tiredness and weariness.

Choline Bitartrate - choline bitartrate. Choline is a substance necessary for the proper functioning and construction of every cell in our body. It occurs in the body in compounds called phospholipids, the best known of them and the most abundant of them is lecithin. Phospholipids have many functions in our body, they build cell membranes and act as transmitters in the nervous system (most likely they are involved in "creating" memory). An important function of choline is its participation in the transport and metabolism of cholesterol and other fats - it reduces their deposition in the vascular wall and gall bladder, and also affects the functioning of the liver (also reducing fat deposition) and kidneys (regulates the amount of urine excreted).

Panax Ginseng Extract - Used for thousands of years as a panacea and a recipe for longevity. Thanks to the content of many active compounds (triterpene saponins, panaxanes and ginsenanams, sterols, polypeptides, amino acids, fatty acids and their glycerides and minerals), it has a very wide application. Its main properties include: it reduces excessive stimulation caused by taking stimulants, increases physical performance, supports the immune system and contributes to the maintenance of the health of the body.

Guarana Extract - rich in caffeine, the most famous thermogenic compound in the world. It has a stimulating effect, lowers the level of adenosine, inhibits the breakdown of cAMP - thus enhances the thermogenic processes in the body (the release of energy generated during fat burning in the form of heat) and lipolytic processes (breakdown of fats into free fatty acids.

Ginkgo Extract - effectively improves memory disorders and problems with concentration. It has a positive effect on the circulatory system, improving blood flow in the vessels. What's coolest, it slows down the aging process. It inhibits or eliminates unpleasant tinnitus and dizziness. It has a slightly diuretic and cleansing effect. It inhibits the activity of free radicals (antioxidant effect), which helps to keep the skin youthful. The positive effect of ginkgo extract on the human body has been well known in China for 5000 years.

Bacopa Monnieri Extract - stimulates the nervous system - especially the limbic system, which includes the hippocampus responsible for memory processes. It also has a diastolic, antiepileptic, analgesic and anti-stress (adaptogenic) effect - eliminating nervous tension and typical distraction. It restores harmony and brings relief from depression. It enhances the processes of learning and memory, improves concentration and stimulates the formation of new nerve connections. It prevents the hypertrophy of the prostate gland. The compounds contained in the plant also support the processes of cell renewal and regeneration, and stabilize the structure of cell membranes.

Rhodiola Rosea Extract - a plant belonging to the group of adaptogens, i.e. plants that help the body adapt to high mental and physical stress. Its main action is to relieve fatigue, improve concentration and improve mood. All this translates into better results both at the gym, as well as at work or school.

Green Tea Extract - The catechins in green tea inhibit an enzyme called catechol O-methyl transferase or COMT, which actually breaks down the fat burning hormone norepinephrine. Since green tea is rich in catechins, it helps to raise norepinephrine levels, keep it elevated and prolong thermogenesis. It has also been shown that there is a synergistic interaction between caffeine in green tea and catechins (particularly EGCG) in green tea, which increases the body's use of calories as energy. Moreover, the combination of caffeine and EGCG in green tea was found to significantly increase the resting metabolic rate.

Niacine - Niacin is extremely important for the functioning of the peripheral nervous system. Niacin increases the activity of mitochondria. In addition, it contributes to the proper maintenance of cholesterol in the blood, and also participates in the synthesis of sex hormones: insulin, cortisol and thyroxine.

Pantothenic Acid - Pantothenic acid is extremely important for the skin as well as the hair. Vitamin B5 deficiency in the body is manifested by pathological changes on the skin, such as keratosis or excessive exfoliation of the epidermis, pigmentation disorders as well as hair loss. A deficiency of this vitamin causes numbness of the toes.

Black Pepper Extract - the active ingredient of black pepper, has a thermogenic effect. It can increase the blood supply to the digestive tissues, resulting in better digestibility of food ingredients. It significantly improves the bioavailability of many active ingredients of supplements.

Vitamin B12 - is a vitamin responsible for the proper functioning of the nervous system, it is also involved in the metabolism of proteins and fats, and contributes to the proper level of homocysteine, supporting the circulatory system. It stimulates the production of serotonin - a neurotransmitter responsible for a good mood. It also acts directly on the brain cells to protect them from toxins. 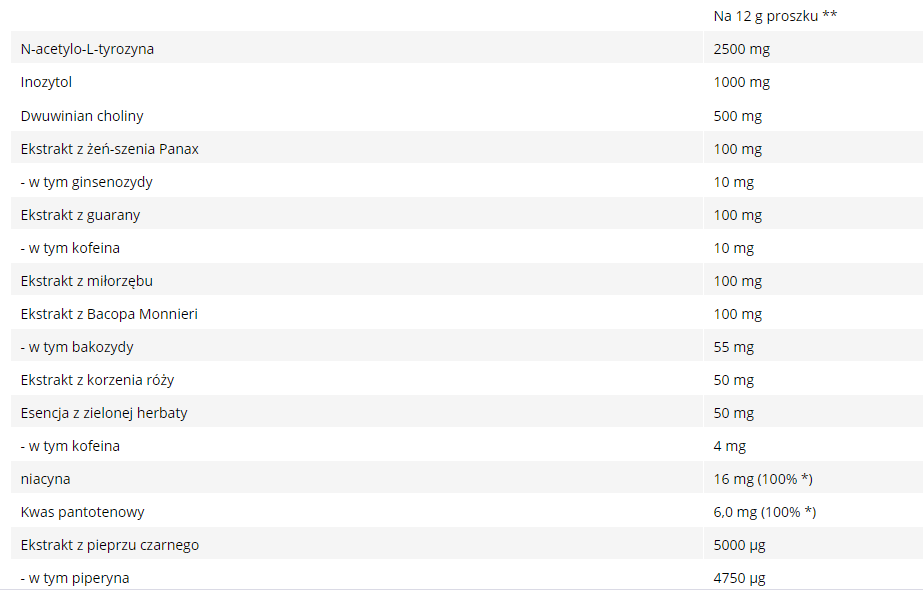