Redcon 1 Mental Trigger is a new nootropic supplement. It affects high concentration, mindfulness and stimulates the creativity of the brain. The advanced formula based on proven ingredients perfectly improves well-being, increases cognitive functions and improves physical and mental condition.

Mental Trigger stimulates brain activity, increases energy levels, adding training motivation. A nootropic supplement is a reliable focus enhancement for people who are not too sensitive to stimulants. The preparation contributes to the improvement of dopaminergic and cholinergic brain pathways, ensuring the improvement of mental functions.

Caffeine Anhydrous - has a thermogenic effect and suppresses appetite due to the increase in the production of adrenaline and norepinephrine. It has been proven that it causes an increase in the formation of neurotransmitters such as dopamine, acetylcholine or even serotonin in the central nervous system, which exerts a stimulating effect and increases cognitive functions. The overall effect of caffeine on the body allows you to maintain the effectiveness of training and maintain a positive mood, despite the caloric deficit.

Hesperidin - is a bioflavonoid that is most abundant in the peel of citrus fruits and just below it in the form of a white albedo. It is a powerful antioxidant that scavenges free radicals from the body, which has a positive effect on the circulatory system. Eliminates swelling and prevents the formation of the so-called spider veins and varicose veins. According to the latest research, this compound has the ability to lower blood pressure and bad LDL cholesterol. Recent studies show that it has anti-estrogenic effects.

Theacrine - is an alkaloid that is structurally similar to caffeine and also activates similar signaling pathways. Under natural conditions, theacrine is most likely synthesized from caffeine and then stored. It is believed to be the most concentrated in Chinese tea Camallia sinensis, where it occurs alongside caffeine and theobromine. This substance effectively increases the level of energy in the body, and its action is very similar to caffeine, with the difference that it works much longer, shows a slower increase in tolerance and does not cause unpleasant effects. In addition, the substance does not increase blood pressure.

Mucuna Pruriens - highly bioavailable for the brain, which easily and effectively increases the possibilities of dopamine synthesis. This amazing neurotransmitter is an extremely important element for the proper functioning of the nervous system and the flow of nerve signals. Dopamine deficiency has been demonstrated in people diagnosed with Parkinson's disease, especially in the regions of the brain responsible for its motor level. Low levels of this neurotransmitter may be manifested by the onset of memory loss, problems with achieving full focus and concentration, and it often affects the elderly.

Alpha GPC - choline alfoscerate is a natural precursor of acetylcholine, which is a neurotransmitter that supports the development of cognitive functions, and also positively influences the improvement of memory. Alpha GPC is a highly bioavailable form of choline that is part of cell membranes in the brain and other nervous tissues. Scientific research has shown that supplementation with Alpha GPC really increases the level of acetylcholine in the brain, which translates into significantly better memory and concentration, also in young people. Other clinical trials have found supplementation with L-alpha-glycerylpforsorylcholine supports brain function

BioPerine - the active ingredient of black pepper, has a thermogenic effect. It can increase the blood supply to the digestive tissues, resulting in a better digestibility of food ingredients. It significantly improves the bioavailability of many active ingredients of supplements.

1 capsule in the morning on an empty stomach. 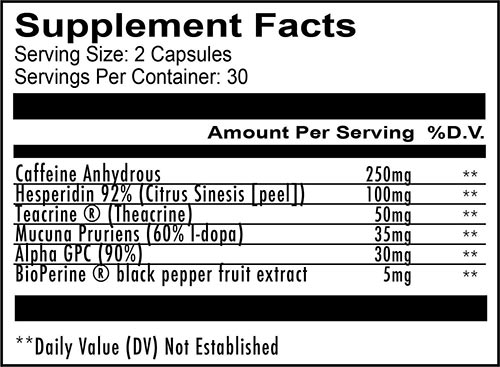