L-Citrulline - participates in the synthesis of nitric oxide (NO), phosphocreatine and oxygen glucose metabolism, thereby increasing the intake of oxygen, glucose, amino acids, creatine. In addition, it reduces the concentration of lactic acid and ammonia in the muscles, allowing the body to regenerate muscles faster by increasing creatine phosphate and ATP resynthesis. citrulline is a much more effective form than high doses of arginine, because it is its precursor, hence - the same dose of citrulline is more effective than arginine alone.

Beta Alanine is essential for the production of carnosine and protein building blocks that help prevent aging. The compound supports the proper functioning and development of muscles. The amino acid is known to reduce muscle fatigue, which can help your muscles work better during training. This in turn promotes muscle growth. Beta-Alanine is especially helpful in intensive short-term workouts such as weight lifting. Some people taking beta-alanine may notice a slight tingling sensation known as paraesthesia. Tingling occurs because beta-alanine dilates the blood vessels, allowing more oxygen and blood to be delivered to the muscles.

Betaine Anhydrous- is an amino acid that naturally occurs in vegetables such as broccoli, beets and spinach. The main action of the compound is to reduce the level of homocysteine, which is a substance with highly toxic properties. It is produced most often in people who consume large amounts of meat, bodybuilders and other athletes, because meat usually constitutes their dietary base. In addition, it can adversely affect the skeletal and cardiovascular systems.

Choline Bitartrate is a substance necessary for the proper functioning and construction of every cell in our body. It occurs in the body in compounds called phospholipids, the most known of them and occurring in the largest amount is lecithin. Phospholipids perform many functions in our body, build cell membranes and act as messengers in the nervous system (most likely they take part in the "creation" of memory). An important function of choline is its participation in the transport and metabolism of cholesterol and other fats - reduces their deposition in the wall of vessels and gallbladder, besides, it affects the liver (also reduces fat deposition) and kidneys (regulates the amount of urine excreted).

Dynamine-molecular structure is similar to axin (also known as TeaCrine®) and is believed to behave in a similar but more intense manner in the body. Like acryna, methylliberine clearly increases energy, mood and concentration by activating dopamine receptors and other key neurotransmitters, inhibiting adenosine receptors, all without increasing the pressure.

Caffeine Anhydrous - acting on the central nervous system, increases energy levels, improves cognitive function, mood and concentration. Acting as a sympathomimetic, increasing the activity of the sympathetic nervous system, increases the level of adrenaline in the blood, dilates blood vessels supplying muscles with a greater amount of nutrients, increases the level of blood glucose from fatty acids.

L-Norvaline- increases the availability of arginine for endothelial NO synthesis (eNOS). Thus, it promotes its transformation into citrullin and nitric oxide (NO). It affects: improvement of blood circulation in the blood system, inhibition of platelet aggregation, inhibition of leukocyte adhesion to the endothelium, oxygenation of cells and their detoxification.

ElevATP - a patented substance that increases the production of Adenosine-5'-triphosphate in the body. ATP is a universal energy carrier. High-energy bonds allow the energy to be released during their breakdown. ATP plays an extremely important role in strength training. During the decrease in ATP playback performance, there is a decrease in training possibilities. The compound cannot be stored due to its properties, which is why it is worth preparing your body for physical effort. A good idea is to supplement muscle glycogen by providing the right amount of carbohydrates as well as providing the substance in the form of a supplement.

Infinergy is a buffered version of caffeine that produces the same stimulating effects of caffeine, while protecting the stomach from the disorders that can occur with anhydrous caffeine. In particular, malic acid works to improve the function of the digestive tract and stomach, while playing an important role in the Krebs cycle. Infinergy helps reduce fatigue, improve concentration, increase physical fitness and speed up the thermogenesis process. In particular, it reduces sedation and relaxation by inhibiting the production of adenosine, a sleep-related chemical. This results in increased wakefulness, concentration, better body coordination and increased performance during training.

N-Methyltyramine Hydrochloride - a compound extracted from bitter orange or barley fruit. N-methyl-tryamine (NMT) is formed by adding the "methyl" group to the well-known biogenic amine, L-Tyramine. No, this is not a synthetic ingredient. Plants can actually produce NMT using the tyramine N-methyltransferase enzyme. Extracting NMT from plants is cheaper than synthetic NMT creation. Its action is based on the stimulation of beta receptors, which play a significant role in the fat burning process. In addition, the compound exerts an anabolic effect, increases blood flow to muscles and increases cell efficiency in burning glucose. Another important advantage is that it improves brain function - Increases the number of neurotransmitters, thanks to which you think faster and react in a split second. This is very useful especially in sports competitions.

Huperzia serrata is one of the most desirable substances from the group of agents providing so-called brain doping. It allows you to achieve maximum concentration, focus and isolate our attention in almost every situation. Perfect for people with very demanding intellectual work as well as students or high school graduates. Unlike many other stimulants acting on our mind, its effect does not weaken over time and we can enjoy the benefits of hupercin supplementation for a very long time. The natural source of its occurrence is the forkbeard Huperzia Serrata, and it is also used in alleviating the symptoms of Alzheimer's disease. It is also responsible for increasing the amount of bioavailable acetylcholine which is necessary in the process of restoring memory. 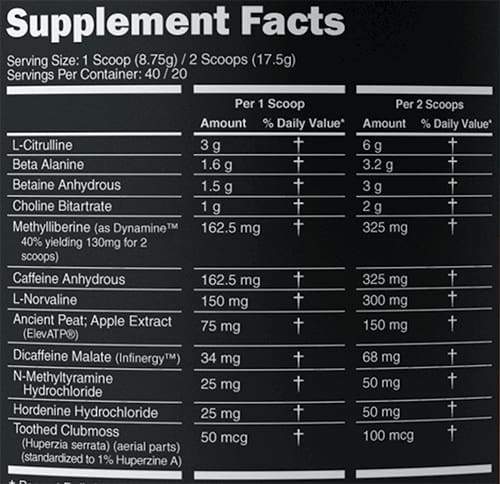