Syntrax Matrix BCAA Amino Blend is a blend of BCAA amino acids that helps deliver key amino acids and electrolytes. Matrix BCAA Amino is extremely effective in action. It contains a high content of branched chain amino acids, as well as other additives such as HICA - four times stronger than leucine. BCAA amino acids support protein synthesis and regeneration of muscle tissue. They are responsible for 90% of the total absorption of amino acids by the muscles. These three important amino acids in the right proportions are easily absorbed by the body.

BCAA branched amino acids are ideal for people who want maximum growth and regeneration of muscle tissue. Thanks to the high dose of electrolytes contained in Syntrax Matrix Amino, you will replenish the ingredients lost during intense workouts. You can use the supplement at any time of the day. It is devoid of artificial dyes. The delicious, natural taste of the fruit is undoubtedly an added benefit of amino acids.

L-Leucine - affects the synthesis of skeletal muscles in several ways: it increases the secretion of insulin, a powerful anabolic present in our body, affects the activity of the S6 protein kinase, accelerates the phosphorylation of the eIf4E binding protein and affects the degree of connection between proteins (eIF) 4E and eIF4G. All this, despite the complicated sound and nomenclature, boils down to a very simple statement - leucine increases the degree and speed of protein utilization to build muscles.

L-Citrulline - citrulline although it is not involved in the process of building muscles, plays an extremely important biological role, participates in the urea cycle, where, during metabolic changes, it helps to neutralize toxic ammonia. On the other hand, the ionized form of malic acid takes part in energy changes that take place in absolutely every cell. The combination of the two above-mentioned ingredients into one molecule brings significant benefits to all physically active people, both professional athletes and amateurs.

Beta-Alanine - belongs to organic chemical compounds from the group of amino acids. The structural isomer of alpha-alanine, i.e. the basic protein amino acid. It belongs to the so-called β-amino acids in which the amino group is on the β-carbon with respect to the carboxyl group. β-alanine is a component of the carnosine dipeptide (β-alanyl-L histidine), the biosynthesis of which depends on the availability of β-alanine as a substrate. Carnosine buffers the drop in pH associated with, among others with the formation of lactic acid in the muscles during exercise. Therefore, taking β-alanine reduces physical decline. Moreover, β-alanine is a component of other biologically active compounds, e.g. pantothenic acid, peptides: balenin (β-alanyl-1-methyl-L-histidine) and anserine (β-alanyl-3-methyl-L-histidine).

Sodium Citrate - is an electrolyte contained in the amino acids Syntrax Matrix reduces the acid content in the urine, helps the kidneys get rid of uric acid, which helps to prevent gout and kidney stones. Citric acid and citrate salts (which contain potassium and sodium) belong to the class of urine alkalizers.

L-Isoleucine - the supply of large amounts of leucine reduces the level of the other two amino acids: isoleucine and valine, so it is important to use all three compounds together. In addition, isoleucine is classified as glucogenic amino acids, i.e. those that the body can easily and quickly transform into the energy necessary for its functioning. This means that we will not only be able to train longer and more intensively, but also recover faster.

L-Valine - its presence in this combination, owes not only to the aforementioned need to administer all three BCAA amino acids together, but also to reducing central nervous system fatigue. In addition, as in the case of the other two amino acids, it is easily converted into energy used by working muscles and thus allows you to save the glycogen stores stored in the liver.

HICA - alpha-hydroxyisocaproic acid or leucic acid, HICA is a metabolite of leucine that works in conjunction with other active amino acids to stimulate muscle growth and accelerate recovery. It is four times more effective than leucine alone. 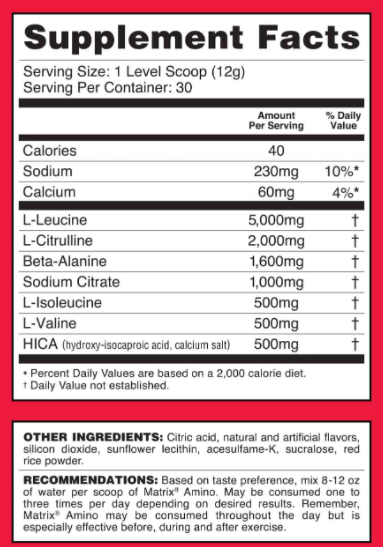