Lipodrene Extreme DMAA from Hi-Tech Pharmaceuticals is a new strong fat burner with the addition of geranium. This is one of the brand's strongest fat burners. Fat burner rich in ingredients with a strongly stimulating effect visibly reduces body fat as well as subcutaneous water. Yohimbine extract helps reduce fat even from the most sensitive areas of the stomach, thighs and buttocks.

High doses of ingredients that accelerate fat burning help you lose weight quickly, while providing energy for the day. The Lipodrene burner supports the mood, prevents hunger attacks and supports detoxification of the body.

Isopropylnorsynephrine HCL - another stimulant substance, has specific properties to extend the lifetime of adrenaline and noradrenaline previously released due to the rest of the substances contained in the supplement.

DMAA - works great both as a stimulant and as a fat burner, especially in combination with caffeine and other substances that stimulate the nervous system and intensify the phenomenon of thermogenesis. This strong active substance effectively provides strong stimulation. It indirectly stimulates the increase of adrenaline levels in the body and directly activates adrenergic receptors. It provides a strong increase in energy, stimulation and concentration. Combined with caffeine, its effectiveness increases. Geranium, after penetrating the nervous system, stimulates the release of dopamine, thanks to which it ensures focus and a good mood, which is crucial during training.

Green Tea- a source of polyphenols used as a natural form of supporting the slimming process. They promote lipolysis, facilitating fat reduction, and may also increase the metabolic rate. In addition, green tea extract is recommended during the period of weight reduction due to its antioxidant potential. Intensive workouts supported by a low calorie diet are an important factor generating oxidative stress. The reduction of free radicals promotes the proper course of regenerative processes, prevents the development of tumors and delays the aging process.

Theobromine is a compound known from the popular yerba mate, showing a diuretic effect, which helps in getting rid of excess water from the body, masking the effects of reducing body fat. It directly increases the aesthetics of the figure by maximizing muscle definition. In combination with caffeine, theobromine also has a thermogenic effect, accelerating the reduction of body fat.

Yohimbe Extract - works by blocking fat-burning α2 receptors that can significantly reduce weight loss and help sculpt resistant parts of the body. It is worth remembering that the effect of yohimbine effectively eliminates insulin, so taking this compound around meals containing carbohydrates is pointless. Yohimbine can be particularly effective when used on an empty stomach, before exercise.

Hoodia Gordonii Extract - is obtained from the Hoodia cactus found in South America. Studies have shown that this extract affects the suppression of hunger, which is useful during reduction diets. This substance is relatively expensive and quite difficult to access - for these reasons, Hoodia is not a common ingredient in fat burners.

Naringin - an organic chemical compound found in citrus fruits (e.g. grapefruit, oranges) and vegetables (e.g. tomatoes). Thanks to its strong antioxidant and anti-inflammatory effects, naringenin counteracts obesity and related diseases. An additional advantage of this substance is its effect on lowering cholesterol.

5-Methoxytryptamine hcl- also known as mexamine, is a tryptamine derivative. This substance is closely related to neurotransmitters, has a concentration-enhancing effect.

L-5-Hydroxytryptophan - otherwise 5-HTP is a precursor to serotonin, which is a naturally occurring amino acid. Studies have shown that 5-HTP improves sleep quality, reduces hunger, improves mood and has a calming effect. Prolonged use of 5-HTP may lead to a reduction in the natural production of serotonin.

Raspberry Ketones- raspberry ketones are an organic chemical compound found in raspberries as well as blueberries and cranberries. Studies have shown that raspberry ketones have an effect of increasing lipolysis and thermogenesis, increasing the metabolic rate and reducing the absorption of fats.

Citrus Natsudaidai Hayata, Citrus Junos Sieb and Ex Tanaka are extracts obtained from citrus fruits found in Japan. These substances are components of fat burners due to their lipolytic activity, prevent cardiovascular disease and are antioxidants.

Citrus Limonium - lemon extract. This substance reduces the feeling of hunger, stimulates the digestive system and helps cleanse the body of toxins.

Citrus Aurantium Extract - bitter orange is not an edible fruit but it is an excellent source of vitamin C, which amount in the extract can reach up to 42%. Bitter oranges are much richer, not only in vitamin C, but also in antioxidants, e.g. bioflavonoids such as hesperidin. In addition to the high content of highly absorbable vitamin C, bitter orange is primarily known for its synephrine content. 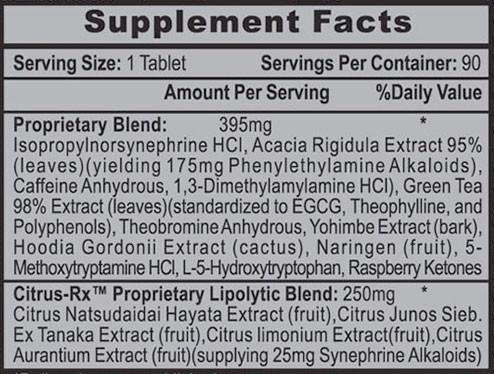