Hi-tech Lipodrene Hardcore version of DMAA - this is a unique cultivar of an iconic burner, enhanced with ingredients that increase energy levels, thanks to which the burner not only burns fats perfectly, but also gives an energetic kick for many hours. The strongest version of the cult burner Lipodrene extreme lowers body fat. The product provides a high dose of energy and allows you to control your appetite for a long period of time. An additional advantage is that the supplement effectively removes water retained in the subcutaneous tissue.

Hi-Tech Lipodrene is the strongest produced burner on the market, an alternative to pharmacological agents based only on ingredients of natural plant origin. Unlike many other such supplements on the market, lipodrene hardcore really reduces the amount of fat accumulated in our body, while the majority of slimming products is a placebo effect.   Hi Tec Pharmaceuticals Lipodrene Hardcore is a strengthened version of its predecessor, considered one of the strongest smokers on the market.

The unique blend of active ingredients is distinguished by its remarkable effectiveness in the fight against persistent fat due to perfectly matched proportions and a record dose of 700 mg of ingredients in each tablet. Due to the diversity of individual substances, this product interacts on almost every metabolic pathway that has a significant impact on weight reduction.

Another advantage of Lipodrene is the possibility of using it regardless of the stage on which we are just because it has ingredients that accelerate the restful metabolism and burn fat tissue from the whole body, which is crucial in the initial stage of reduction. In addition, it supports work on the final definition by removing persistent white tissue and retained subcutaneous water, as well as improves mental mood and increases motivation to exercise, even on low-calorie diets.

Lipodrene Hardcor is also a great energy that allows you to train longer and more intensively, without any fatigue or loss of energy. Due to the variety of stimulants contained in it, the effect of increased energy and strength may be felt after just a few minutes and lasts for many hours, without the feeling of so-called. Descent. In addition, it also improves the functioning of the mind, concentration and focus, which very often are not dealt with by other products available on the market.

Acacia Rigidula Extract - is a source of phenylethylamine, a compound that is structurally similar to amphetamine, produced naturally in mammals from phenylalanine, as well as in plants of bacteria and fungi. It acts as a neurotransmitter in the central nervous system. Binding to TAAR1 receptors which leads to the inhibition of serotonin, dopamine and noradrenaline. Beta phenylethylamine effectively raises the mood and evokes a feeling of euphoria.

Citrus Aurantium - bitter orange is not an edible fruit but it is an excellent source of vitamin C, the amount of which in the extract can reach even 42%. Bitter oranges are much richer than just vitamin C, but also antioxidants, such as bioflavonoids, such as hesperidin. In addition to the high content of perfectly digestible vitamin C, the bitter orange is primarily known for its consistency in the synephrine plant, which is a natural substitute for ephedrine. Synephrine has a similar structure to ephedrine. It is obtained in a natural way, from immature citrus fruit, e.g. Citrus uranium L., Citrus aurantium L. This substance is a natural substitute for ephedra. Increasingly, it is added to drugs and dietary supplements intended for athletes as well as overweight people. This compound boosts metabolism, reduces appetite and at the same time increases mental and motor activity. Synephrine increases blood pressure and affects the minute volume of the heart. It widens the bronchi to facilitate breathing, effectively clears the sinuses and improves well-being.

Cassia Nomame Extract - modern phytochemical studies have shown that Cassia nymph contains many types of phenols, in particular various catechins, such as (2s) -3 ', 4', 7-trihydroxy-flavan- (4'8) -catechin, (2s ) -3 ', 4', 7-trihydroxy-flavan- (4'8) -catechin, etc. Catechins are natural inhibitors of lipase that reduce the amount of fat absorbed by the body, and keep fat molecules in the gastrointestinal tract and make them undigested and blocked in the bloodstream. Cassia Nomination also acts as a natural diuretic, provides a thermogenic effect that stimulates the burning of fat cells in the body. Due to all these properties, it effectively helps in losing weight. The Cassia extract used in food supplements comes from aboveground parts (including leaves, stems and seeds).

Naringen-naringin belongs to the group of flavonoids, is naturally obtained from the grapefruit fruit and is responsible for its bitter sma. The compound has strong antioxidant and anti-inflammatory properties, which are helpful in the prevention and control of obesity, hyperlipidemia, hypertension, atherosclerosis and diabetes mellitus. Naringin effectively suppresses your appetite so that you can get rid of unwanted pounds even faster.

Evodiamine - Evodiamine is a substance of natural origin obtained during extraction from the Wu Zhu Yu plant. The mechanism of its action is based on the stimulation of vanilloid receptors, which leads to increased heat production - thermogenesis and, consequently, higher energy expenditure and faster fat burning.

Yohimbe Extract - is a substance that is helpful in the fight against the so-called resistant fat tissue, located mainly in the thorax and lower waist areas of men and hips, buttocks and thighs in women. Yohimbine works by blocking the α2-type receptors, which clearly facilitates slimming and is helpful in sculpting body parts resistant to slimming. It is worth remembering that yohimbine effectively eliminates insulin. So taking this compound around carbohydrate meals is pointless. Yohimbine is particularly effective when used on an empty stomach, before physical exertion.

Yerba mate extract - is the source of theobromine is a compound known from the popular yerba mate, showing diuretic action, which helps in getting rid of excess water from the body, masking the effects of reducing body fat. In this way, it directly affects the increase of the aesthetics of the body by maximizing the muscle definition. In combination with caffeine, theobromine also has a thermogenic effect, accelerating the reduction of adipose tissue.

Theobroma Cocoa Extract-theobromine contained in cocoa beans, already taken in small doses, causes the blood vessels to widen in the brain, and consequently improves blood circulation and nutrition of this organ and improves its functioning. A similar effect is also shown on coronary vessels. It has a stimulating effect on the nervous system. Theobromine, especially when combined with some polyphenols and caffeine, increases the energy expenditure of the body and supports the process of reducing body fat.

1,3 Dimethylamylamine - i.e. popular geranium is an aliphatic amine that affects the activity of neurotransmitters (including ketecholamines), providing the body with stimulation, also has a thermogenic effect. It improves the ability 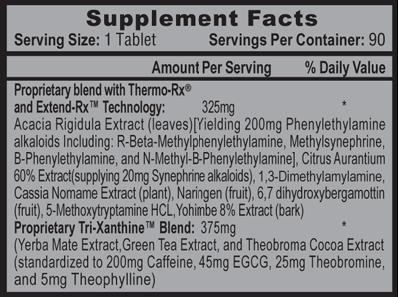