Nutrex Lipo-6 Black Ultra Concentrate is a unique fat burner with a thermogenic effect, which in its composition contains a number of substances with synergistic lipolytic and stimulant effects, thanks to which you will achieve effects you have never dreamed of before!


The composition of the preparation provides assistance in burning resistant fat, due to the presence of substances such as Yohimbina or Rauwolscin. It is one of the few supplements, among which a single daily dose is enough to achieve a satisfactory effect. Its unique composition makes it one of the strongest legal fat burners!

The composition "Lipo-6 Black Ultra Concentrate" is based on the following components:

Anhydrous caffeine is a natural stimulant that has a thermogenic effect and suppresses appetite due to the increased production of adrenaline and noradrenaline. It has been proven that it causes the formation of such neurotransmitters as dopamine, acetylcholine or even serotonin in the central nervous system, which exerts a stimulating effect and increases cognitive functions. The overall activity of caffeine on the body, allows you to maintain the effectiveness of training and maintain a positive mood, despite the calorie deficit.

Anhydrous theobromine is a bitter alkaloid that is similar in both structure and function to caffeine. It has been proven that theobromine increases the production of nitric oxide, which has a vasodilatory effect on the blood vessels, which provides increased thermogenesis and muscle pump feeling during training. In addition, it works diuretic, allowing you to get a better definition of muscle. Theobromine has a long half-life, thanks to which it has an extended thermogenic effect, and in combination with caffeine you get a huge boost of energy and focus on training.

Advantra Z (50% synephrine) is a compound derived from bitter orange, and is considered by many to be a legal ephedrine replacement. Advantra Z exerts a thermogenic effect due to the presence of synephrine. The biological effect of the bitter orange extract is demonstrated by the fact that the active substance has the ability to bind and activate β-adrenergic receptors, thanks to which it activates metabolic metabolism and increases the basic metabolism. In addition, it exerts a weak stimulatory effect on α-adrenergic receptors. It is a compound that acts synergistically with caffeine. It does not increase blood pressure.

Yohimbine is an indole alkaloid isolated from the bark of an African tree of the genus johimby. It is a supplement from the group of stimulants, which thermogenic and lipolytic effect is achieved by the increase of noradrenaline secretion and by the double action on adrenergic receptors. The increase in noradrenaline and adrenaline secretion is associated with decreased appetite. Regarding the alpha-2-adrenergic receptors, their high concentration occurs on fat cells, and especially on the so-called resistant fat.

Yohimbine, by increasing the secretion of adrenaline, causes its association with β1- and β2-adrenergic receptors, which stimulates the breakdown of adipose tissue, and by direct inhibitory effect on α2-adrenergic receptors, inhibits their action to maintain adipose tissue. Another important effect on adrenergic receptors is the stimulation of vasodilation, which increases the flow of blood through the muscle tissue, which is responsible for the muscular pump and has a thermogenic effect. The combined effects of yohimbine result in an increase in basic metabolism.

Rauwolscine is a yohimbine isomer compound, thanks to which its biological effect is the same - it acts as a blocker on α2-adrenergic receptors, which inhibits its negative effect on fat burning. The safety of using the yohimbine derivative as a fat-burning substance results from the fact that it does not directly burn fat tissue, but helps more intensively to use the fatty acids obtained during the lipolysis process as an energy source.

The mechanism and strength of Rauwolscin's action makes it one of the stronger fully legal compounds responsible for burning resistant adipose tissue. In addition to the thermogenic effect and appetite suppressant, an improvement in mood was also observed. This effect is the result of the activation of appropriate receptors in the central nervous system, which results in an increase in the level of serotonin, which is not without reason considered a hormone of happiness!

To sum up, Lipo-6 Black Ultra Concentrate is an effective fat burner whose formula allows multi-level combustion of so-called. resistant adipose tissue, with no negative effect on muscle tissue. This supplement, in which there are so many compounds acting synergistically, will ensure strong fat burning and eu feeling 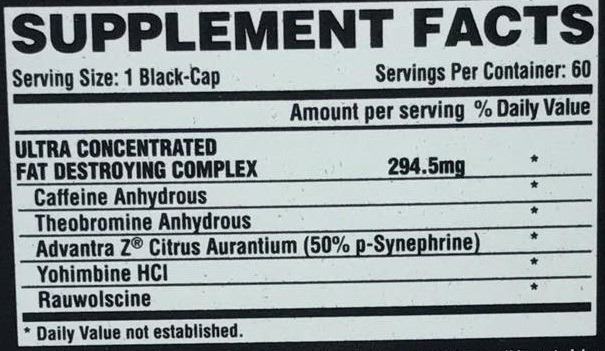