Levro Recovery Kevin Levrone a complex regenerating supplement with the necessary BCAA amino acids including L-glutamine in three forms and an amino acid complex. In addition, it contains ingredients such as HMB, L-carnitine, niacin, vitamins B6 and B12. A rich formula designed for physically active people doing high intensity workouts.

Group B vitamins and niacin effectively reduce the symptoms of fatigue and contribute to maintaining proper energy metabolism. Kevin Levrone Levro Recovery regenerative supplement contains glutamine, one of the most common amino acids in the human body. It contributes to maintaining a positive nitrogen balance in muscles, increases muscle protein synthesis and is a natural booster of the immune system.

L-Leucine - affects the synthesis of skeletal muscle in several ways: increases the secretion of insulin, a powerful anabolic present in our body, affects the activity of the S6 protein kinase, accelerates the phosphorylation of the eIf4E binding protein and affects the degree of binding between proteins (eIF) 4E and eIF4G. All this, despite the complicated sound and naming, boils down to a very simple theorem - Leucine increases the degree and speed of using proteins to build muscle.

L-Isoleucine - supplying large amounts of leucine causes a decrease in the level of the other two amino acids: Isoleucine and Valine, which is why it is so important to use all three compounds together. In addition, isoleucine is classified as glucogenic amino acids, i.e. those that the body can easily and quickly convert into the energy it needs. This means that we will be able not only to train longer and harder, but also to recover faster.

L-valine - its presence in this combination, owes not only to the aforementioned need to administer all three BCAA amino acids together, but also to reduce central nervous system fatigue. In addition, as with the other two amino acids, it is easily converted into energy consumed by working muscles and thus saves the glycogen stores accumulated in the liver.

L-glutamine - glutamine is one of the most common amino acids in the body. It is an element of skeletal muscle proteins and plays a significant role in nitrogen metabolism. Thus, it affects many aspects that have an impact on the effects achieved by the athlete in the form of both muscle mass and strength gains.

Glycine - significantly improves skin elasticity in older women, improves skin hydration and prevents water loss. In addition, the amino acid acts as a neurotransmitter affecting the calming of the nervous system and putting you into deep sleep.

L-threonine- is characterized by a very wide spectrum of action and affects the body comprehensively. One of its valuable properties is its effect on skin condition. Threonine ensures proper hydration of the skin and prevents dehydration.

L-proline - endogenous amino acid. Is a fundamental collagen particle. Proline accounts for over 20% of total collagen. Directly affects the process of creating new collagen molecules. It also allows the removal of damaged protein structures in our skin. Proline strengthens the musculoskeletal system and improves joint strength.

L-tyrosine - has a positive effect on memory and concentration, and improves the fat burning process. The supplement increases motivation, endurance and stress resistance in intensely training athletes. In addition, the product accelerates metabolism, while increasing energy production from adipose tissue.

L-phenylalanine - an often underestimated component of proteins that is widely used both in the context of body development and anabolic processes, as well as improving focus, coordination and muscle sensation. The right dose of this compound significantly contributes to the more efficient work of the nervous system.

L-Arginine - arginine dilates blood vessels and improves blood circulation by providing the right amount of oxygen and nutrients to the muscles. It participates in the synthesis of proteins, increases physical endurance, reduces the level of bad cholesterol in the blood, and also supports the functioning of the immune system. Alpha-ketoglutarate increases collagen production and improves iron absorption, which can increase bone density and strength.

L-histidine - histidine belongs to the essential amino acids. Plays an important role in the protein production process. Takes part in the production of hemoglobin. It is an effective transporter of many key elements, e.g. zinc and iron. These microelements are one of the necessary ingredients for the proper functioning of not only the heart and metabolism. Deficiencies of this amino acid are often associated with a low content of these metals, which in turn is reflected in the hormonal imbalance of the body.

L-methionine - is an essential ingredient for the synthesis of glutathione, one of the most important compounds in the context of protecting the body against free radicals and toxins. It seems that taking methionine simultaneously with the use of paracetamol (or other drugs from this group) can protect the liver and kidneys by preventing their damage. It is sometimes used for poisoning with hepatoxic drugs, alcohol and ammonia. Supports the natural regeneration processes of connective tissue, skin, hair and nails. Often used to relieve acne symptoms.

HMB - short-chain fatty acid is formed from the amino acid (L-Leucine) after each intense physical effort or as a result of prolonged stress. HMB inhibits catabolic processes and stimulates drawing energy from fat. This component simultaneously reduces the degradation of muscle proteins and increases fat burning. HMB intensively supports the building of lean body mass and accelerates post-workout regeneration in athletes and physically active people.

L-carnitine - l carnitine supports athletic performance and promotes endurance, which is why it is eagerly used by athletes. By converting fat into energy, the body reduces muscle glycogen depletion. An additional benefit is less accumulation of lactic acid in the muscles after intense training, so you can do longer workouts without feeling tired.

Vitamin B6 - has a beneficial effect on the overall mood, is responsible for restful sleep, reduces the feeling of pain and prevents the occurrence of various types of chronic diseases. Its level is lowered, among others, by stress. It is a multidirectional vitamin. It is involved in many enzymatic reactions, and its proper level is crucial in maintaining and promoting health.

Vitamin B12 - belongs to the group of vitamins that are soluble in water. It is known by other names: cobalamin or cyanocobalamin. It is not a single substance but a chemical compound containing, among others, cobalt. Deficiencies of vitamin B12 are particularly dangerous and concern mainly the psychological sphere, the nervous system and the hematopoietic system. Vitamin B12 acts as a non-protein component of the enzyme necessary for its activity in the production of monoamine neurotransmitters important for the brain: dopamine, serotonin and norepinephrine. Cobalamin deficiency results in impaired synthesis of these important neurotransmitters, which may result in restrictions on the ability of cells to communicate in the central nervous system.

Non-training days: 1 serving during the day between meals 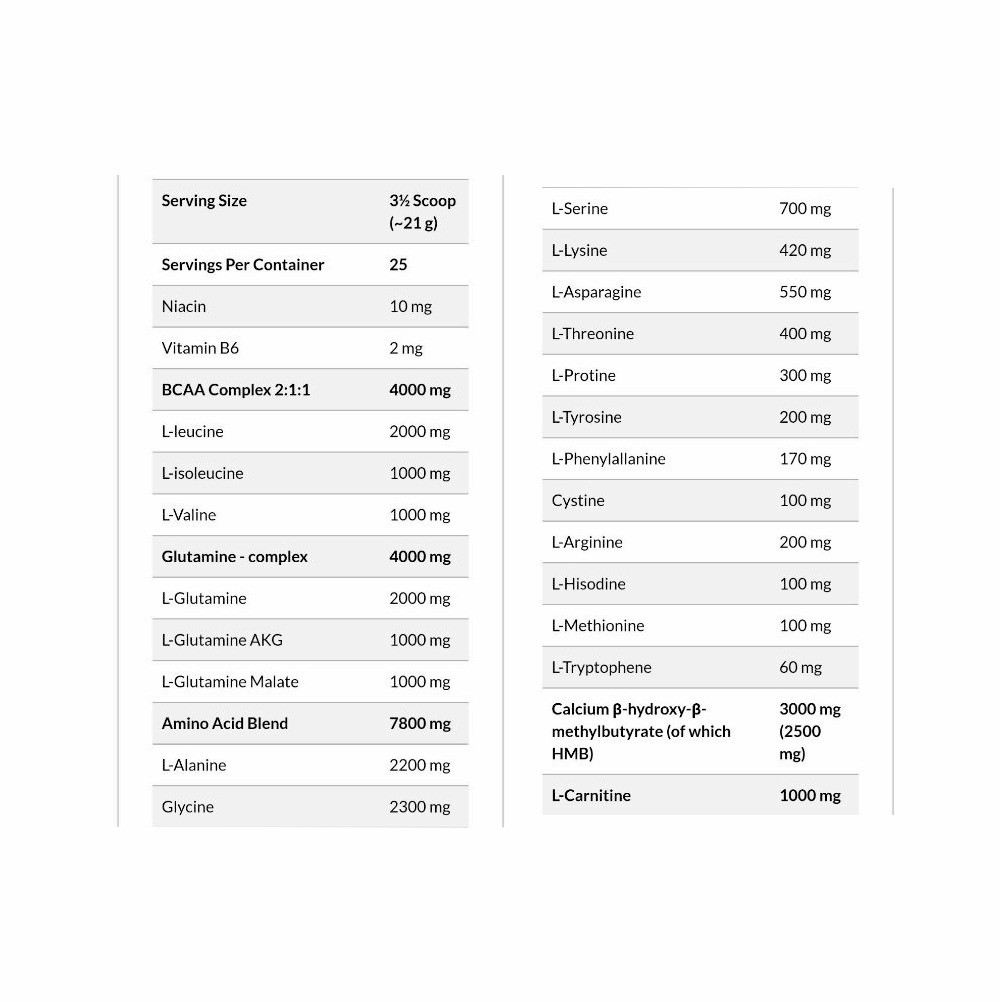