Hi-Tech Pharmaceuticals Jack'D Up is one of the few pre-workout products on the world market, which in this seemingly not very complicated composition, exhibits incredible efficiency. The bold formulation of the product has been composed using only the most effective substances, taking into account their required doses.

The Jack'D Up product includes, among others:

Beta-Alanine - together with l-histidine form a dipeptide - carnosine. Carnosine is released from the cells when the pH drops, thus preventing the increase of muscle acidity, which may translate into less pain and better endurance in training. It may contribute to a more efficient build of dry muscle, it also supports the fight against oxidative stress and may delay the aging of the body.

Anhydrous caffeine - the most-known stimulant compound in the world. It has a stimulating effect, lowers the level of Adenosine, inhibits the breakdown of cAMP

L-Arginine - The most well-known property of arginine is the synthesis of nitric oxide - a substance that dilates blood vessels. Thus, arginine contributes to a more efficient and faster transport of nutrients and oxygen to working cells, as well as the discharge of toxic metabolic compounds, inhibiting metabolic processes.

1,3-Dimethylamylanime HCL - in other words methylhexamine or geramine, in short DMAA. Geranium has strong sympathomimetic properties. By blocking norepinephrine uptake, it increases its concentration, leading to increased nervous excitability. This increases concentration, clarity of thinking and motivates the body to act. Raising the body temperature has a thermogenic effect. It supports the loss of unnecessary fat.

Agmatine - The effect of agmatine as a precursor of nitric oxide is related to its interaction with alpha-adrenergic and imidazole receptors. It also significantly influences the activity of the ornithine decarboxylase enzyme and NOS isoenzymes. The right dose of agmatine effectively promotes the secretion of nitric oxide
in the human body, which translates into a strong muscle pump feeling. Enlargement of blood vessels supports blood and nutrients supply to working muscles, showing support for muscle regeneration and building.
In studies using agmatine, it has been shown that its action may support protein synthesis even twice, which in addition to the action of agmatine itself, is also related to the action increasing the inflow of building components to muscle tissue. 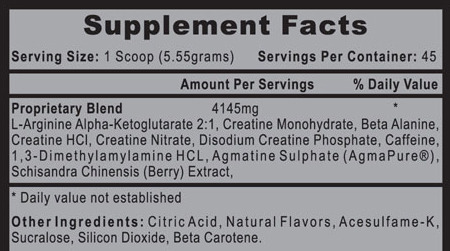 Users reviews
Number of reviews: 2 Average score: 5.00
Score:
Author: Stanislav, Uttran
2 scoops and you can experience massive pump with lightning strike.thanks to bodyshock
Score:
Author: Jay, London
pleasantly surprised by the action of stimulation and strong pump 10/10
To rate this product or to add a new review, you need to log in.
Recommended