HI-TECH HydroxyElite is a comprehensive thermogenic supplement that thanks to a specially formulated formula ensures prolonged fat burning compared to other supplements in this group! It has powerful stimulating and lipolytic substances that help you go beyond the natural level.

Thanks to the presence of compounds that stimulate the formation of serotonin, it ensures the maintenance of a positive mood despite the progressing caloric deficit. It is a great tool in the fight against resistant fat and will help you achieve your goals!

Bauhinia purpurea or orchid tree is a naturally occurring plant in south-east Asia. It contains a substance with proven thyroid stimulating activity for the production of T3 and T4 hormones, and enhances the conversion of T4 to the more active T3 hormone. The result of thyroid stimulation is the increase in resting metabolism.

In addition, the work of the thyroid is important in relation to the use of carbohydrates. In addition, it stimulates the breakdown of cholesterol and increases the level of serotonin, thanks to which it will help maintain a positive mood during the reduction period.

Due to the presence of both orchid extract, Bacopa monnieri and caffeine in HydroxyElite, it intensifies the thermogenesis process. In addition to the positive effects on fat burning, Bauhinia purpurea extract also has a health-promoting effect due to its anti-inflammatory and antifungal properties.

Bacopa monnieri is an adaptogen widely used in Ayurvedic medicine. It contains a number of active ingredients that are responsible for positive effects in terms of concentration and concentration, as well as help in fat burning. Bacopa monnieri extract has a positive effect on thyroid regulation, thanks to which it allows the production of one of its hormones - thyroxine (T4). Thanks to this, it increases the level of resting metabolism.

In addition, it has a positive effect on the transmission of information between neurons and increases blood flow through the brain, which increases concentration, memory and concentration, and improves mood thanks to the positive impact on the serotonergic system. Thanks to the stress-reducing effect, it has a positive effect on regeneration in exercising people. In its composition it also has compounds that are insulinimimetics.

1,3-Dimethylamylamine HCl better known as DMAA is an extract obtained from the stem of the Geranium plant growing in China. It has an adrenaline-like stimulant acting by directly acting on the α- and β-adrenergic receptors or indirectly by stimulating noradrenaline production. In addition, it is a compound that inhibits noradrenaline reuptake, which increases its concentration in the body, which has a thermogenic effect.

DMAA has a synergistic effect with caffeine, thanks to which it enhances its stimulating and concentration-enhancing effects. Thanks to the ability to penetrate the blood-brain barrier, it stimulates the release of dopamine, which has a positive effect on mood and stimulation. By using HydroxyElite you get a quick stimulation that lasts for a long time!

Cirsium Oligophyllum has a thermogenic effect, which enhances the burning of subcutaneous fat. It demonstrates a synergistic effect with β-adrenergic agonists and stimulates the expression of thermogenin, which is responsible for the release of closed energy in adipocytes in the form of heat. The co-occurrence of caffeine intensifies the thermogenic effect of the extract. In addition, it has important antioxidant health effects!

Rauwolfia Serpentina (Rauwolscine) is a derivative of yohimbine, which has an α2-adrenergic blocking activity, which promotes the burning of body fat. Its strong selectivity towards these receptors makes it one of the stronger and, at the same time, fully legal substances responsible for fat burning present in resistant regions of the body!

In addition, it reduces appetite, which is an important factor in the last phase of reduction when the amount of calories consumed is very low. By increasing the level of serotonin in the central nervous system it allows you to maintain a positive mood in this difficult period!

Garcinia Cambogia (60% Hydroxycitric Acid - HCA) is isolated from the skin of Tamarind's Malabar fruit, which plant can be found in Southeast Asia and India. The high content of hydroxyacetic acid in the extract has a twofold effect on the fight against adipose tissue. It has a blocking effect on the liver enzyme - ATP-dependent citrate lyase, whose task is to store the consumed sugar and total carbohydrates into adipose tissue. Thanks to this action the body is able to use directly carbohydrates circulating in the blood as a source of energy!

In addition, HCA suppresses the feeling of hunger by stimulating the secretion of the happiness hormone - serotonin in the central nervous system, thanks to which it will be possible to maintain a good mood in a progressive reduction! Numerous studies have also shown a positive effect on the lipidogram.

Anhydrous caffeine is a natural alkaloid that exerts a stimulating effect on the central nervous system, thus enhancing thermogenesis and reducing hunger. Caffeine has a positive effect on the production of adrenaline and noradrenaline.

In addition, it increases the production of neurotransmitters such as dopamine, acetylcholine or serotonin, which stimulates and gives an additional boost of strength to hard training. Its lipolytic and thermogenic effects are the result of inhibiting the breakdown of intracellular cAMP and by affecting β-adrenergic receptors, increasing its production.

The presence of caffeine in HydroxyElite has a synergistic effect on other ingredients present in it, thanks to which fat burning will be achieved with greater intensity!

1 caps in the morning and a second capsule before training or in the afternoon. 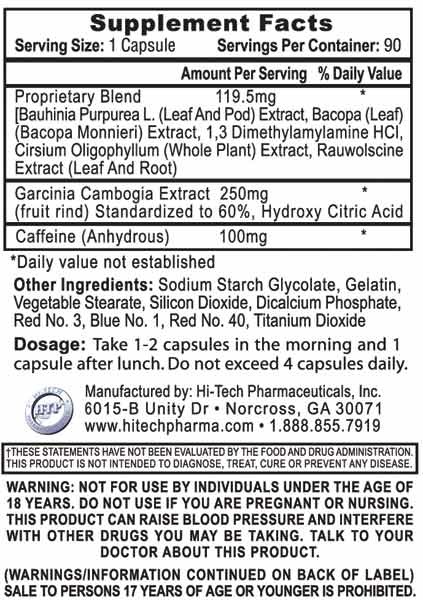