Innovative Hellfire - this is the best burner ever made, and there is no hint of exaggeration in this sentence. It is aimed at people who are simply looking for the best product on the market and everything else does not matter.


Innovative Hellfire in the DMAA version is now a cult and very desirable product!

Hellfire owes its unique action to an intensified known ingredient that burns adipose tissue. It also contains a number of ingredients with thermogenic and energy effects.

Methylhexanamine hcl (1,3-Dimethylamylamine) - An ingredient also known as DMAA is derived from pelargonium root extract. It is a natural stimulant that provides energy unlike anything else on the market. It is also famous for its strong appetite suppression. In the case of people on a diet, reduces the desire for unhealthy food, sweet and spicy, which makes it easier to maintain a clean diet.

Caffeine is undoubtedly the best known, most commonly used stimulant throughout the world. It can be found under various natural forms such as coffee or guarana to synthetic found in energy drinks and supplements. Its effectiveness and safety all over again means that it can be successfully used by almost all healthy adult people to increase the mobilization of the body for greater mental or physical effort.

Caffeine itself does not have a thermogenic effect, but, in harmony with ephedrine, it perfectly complements its action. It stimulates the nervous system. This is manifested in arousal, reduced fatigue, increased energy levels. Increases exercise capacity, enabling training sessions with a longer duration. In addition, it shortens the reaction time, which means we feel refreshed, increased mental work, memorization and learning abilities. Perfectly reduces drowsiness and feeling of weariness, lack of energy. Caffeine mobilizes energy reserves. It works lipotropowo, increasing the bioavailability of backup fat - raises their concentration in the blood

Rutakarpine is an alkaloid derived from the plant Evodia Rutaecarpa, which is also the source of ewodiamine. Different properties are attributed to Rutaekarpina, but its influence on the activity of hepatic enzymes in the liver metabolizing certain chemical substances is very important. What does it mean? This means that when you administer ruticotipine with other substances, you can achieve higher plasma concentrations than when administered without this supplement. In addition, in scientific studies, this alkaloid has been shown to increase the vasodilating effect of nitric oxide, probably by affecting the level of calcium ions in cells, but the mechanism is not fully understood. Rutaekarpina can therefore be widely used in sports supplementation, on the one hand as a substance that increases the activity of some of the ingredients of supplements with which it is administered, on the other as a complement to the formula of no-boosters.

Green Tea Extract contained in Innovative Hellfire is the most commonly used natural and safe supplement that reduces excess fat on the body. It is extremely rich in biologically active compounds that have a strongly documented effect on the acceleration of resting metabolism. Many studies indicate that the polyphenols and catechins contained in it can accelerate the restful metabolism by up to 4%. These substances activate the processes of thermogenesis and the burning of fatty tissue as the preferred source of energy, at the same time protecting the muscle proteins against catabolism, which allows the body to figure skeletal muscles. Green tea guarantees maintaining a consistently high level of energy without any mood swings. The active compounds of this plant have an impact on the scavenging of free radicals, which comprehensively protects the body against aging and many diseases associated with toxic factors. A slightly diuretic action of green tea makes it helpful in getting rid of the excess of unsightly looking subcutaneous water.

Coleus Froskolli - Nettle Forskohli - the forskolin contained in the root of this nettle mimics adrenaline by its action - raises the level of cAMP, which activates HSL lipase ("breakdown" of the fat that accumulates into free fatty acids and release them into the blood). However, unlike adrenaline, it does not stimulate the central nervous system, and thus avoids side effects such as nervousness or convulsions.

The chemical structure resembles adrenline, which causes triggers in the body similar mechanisms. Theophylline is currently considered one of the most potent nerve stimulants of burning fat. It is thought that it is the only substance that matches ephedrine in terms of increasing the level of energy and accelerating the metabolic rate. No small amounts of 1,3 cause strong stimulation of the nervous system, initiation of decomposition and burning of fat tissue. The use of theophylline is accompanied by tides of powerful energy, increased endurance and psycho-physical efficiency. This allows you to train with insane intensity for a longer time without feeling tired or burned and burning more of the spare fat. Rawolscine or Alpha Yohimbine HCL this amazing alkaloid causes the increase in the secretion in the body of the so-called ketocholic amines, which include adrenaline and noradrenaline. After an increased level of energy, these hormones have a direct effect on the metabolic rate. They give the order to burn spare fat. In addition, the unique feature of yohimbine is the activation of alpha-2 adrenergic receptors, which causes a strong expansion of the blood vessels within the subcutaneous tissue of the thighs, abdomen and hips. Thanks to this phenomenon, redundant fat becomes much more available as the preferred source of energy. It is possible to model the figure in places that until now seemed to be more resistant to any diets, exercises or substances that burn fat.

Dosage and use: 1 cap. 30 minutes before intense training. In the case of experienced players, one additional day can be used during the day or in the morning while maintaining at least a 6-8 hour interval between the portions. Never use more than 2 capsules during the day. A burner designed exclusively for fully healthy and advanced users. 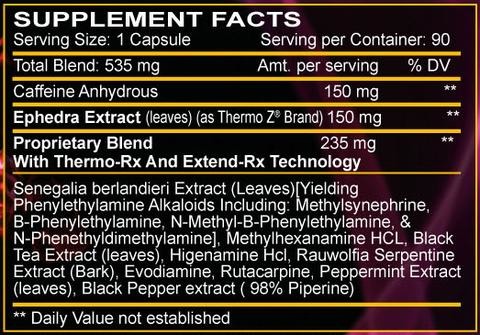