The effective muscle pump is due, among others, to citrulline, which causes an increased flow of blood to the muscles. Helios pre-workout supplement is not only a visual experience of full, shapely muscles, but also incredible energy and increased fat loss thanks to the reliable yohimbine.

L-Citrulline - participates in the synthesis of nitric oxide (NO) and phosphocreatine and the oxygen metabolism of glucose, thus increasing the uptake of oxygen, glucose, amino acids and creatine and energy production by muscle cells. It reduces the concentration of lactic acid and ammonia in the muscles, allowing the body to recover energy faster by increasing the level of creatine phosphate and re-synthesizing ATP. Citrulline malate is a much more effective form than high doses of arginine, as it is its precursor. At the same dose as arginine, it is more effective in increasing its amount in the body than arginine alone.

Choline Bitartrate - choline bitartrate. Choline is a substance necessary for the proper functioning and construction of every cell in our body. It occurs in the body in compounds called phospholipids, the best known and the most abundant of them is lecithin. Phospholipids have many functions in our body, build cell membranes and act as transmitters in the nervous system (most likely they are involved in "creating" memory). An important function of choline is its participation in the transport and metabolism of cholesterol and other fats - it reduces their deposition in the vascular wall and gallbladder, and also affects the functioning of the liver (also reducing fat deposition) and kidneys (regulates the amount of urine excreted).

Caffeine Anhydrous - caffeine has a thermogenic effect and suppresses appetite due to the increase in the production of adrenaline and norepinephrine. It has been proven that it causes an increase in the formation of such neurotransmitters in the central nervous system as dopamine, acetylcholine or even serotonin, which exerts a stimulating effect and increases cognitive functions. The overall effect of caffeine on the body allows you to maintain the effectiveness of training and maintain a positive mood, despite the caloric deficit.

Glucoronolactone - a glucose metabolite that is formed in the liver. It can be converted to xylitol, glucaric acid and L-xylolase. As a derivative of glucuronic acid, its detoxification effect is postulated - by binding to toxins, increasing their solubility in water and enabling excretion through the kidneys.

N-Phenethyl Dimethylamine Citrate - known as Eria Jarensis acts as a neuromodulator on the central nervous system, providing many benefits for cognition. Provides effects that improve mood by increasing the level of dopamine and nor-adrenaline in the body. Dopamine is responsible for increasing the sense of well-being, and therefore Eria Jarensis extract provides a euphoric effect and at the same time reduces the feeling of anxiety. Dopamine and norepinephrine are also associated with increased mental alertness and concentration. It has an effect similar to DMAA - it ensures agitation, great concentration, alertness and the euphoric effect.

Aminoisoheptane - is a stimulant that has other names such as 2-aminoisoheptane or octodrine. DMHA relaxes the bronchi, thanks to which our aerobic capacity increases, moreover, it exhibits contractile activity (narrowing of blood vessels, causing an increase in the rate of oxygen flow), does not cause "stupor" and sharpens the senses, which could not always be experienced with dmaa.

Octopamine HCL - a natural substance whose source is the fruit of bitter orange. It exhibits the properties modulating the adrenergic system. It has a stimulating effect on beta-3 adrenergic receptors, which results in the breakdown of fat cells in the body. In sports supplementation, it is used in fat burners and pre-training supplements due to its thermogenic and lipolytic properties. The substance also effectively suppresses the appetite.

Theobromine HCL - a compound known from the popular yerba mate, showing a diuretic effect, which helps in getting rid of excess water from the body, masking the effects of reducing body fat. In this way, it directly affects the aesthetics of the figure by maximizing the muscle definition. In combination with caffeine, theobromine also has a thermogenic effect, accelerating the reduction of body fat.

Yohimbine HCL - yohimbine hydrochloride is considered to be the strongest form of yohimbine because we know the exact concentration of the substance used. Studies have shown that it is effective in treating male impotence. By blocking alpha-2-adrenergic receptors, it allows for the loss of excess fat, which usually accumulates in women on the hips, thighs and buttocks, and in men on the abdomen and lower back.

Huperzine A - one of the most amazing alkaloids used to increase the ability to remember. Hupercine A is one of the most desirable substances from the group of agents providing the so-called brain cheering. It allows you to achieve maximum concentration, focus and isolate our attention in almost every situation. It is perfect for people with very demanding mental work as well as students or high school graduates. Unlike many other stimulants that affect our mind, its effect does not weaken with time and we can benefit from hupercine supplementation for a very long time. 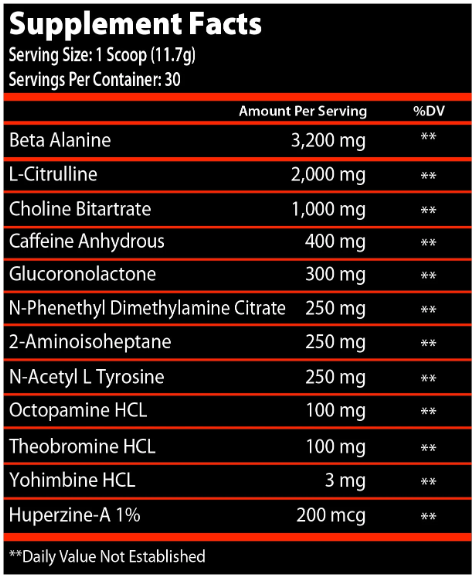