Yohimbe is a popular herb from South Africa and known worldwide as a strong aphrodisiac. It is extracted from the inner bark of the tropical tree of West Africa (Corynanthe Yohimbe). For centuries, raw bark has been used as a means to strengthen sexual performance and pleasure.


Yohimbe was first discovered and used to obtain aphrodisiacs by Pygmy and Bushmen in West Africa, where it grows wild. Bantu tribes in West Africa are still using and extolling yohimbe today for its powerful aphrodisiac action. These western African tribes also used it to treat fever, leprosy and cough. It was also used to dilate pupils, heart diseases and local anesthesia.

In the nineteenth century, some German missionaries discovered yohimbe in West Africa and brought it back to Europe, where it quickly became very popular.

In the 1960s, the US Food and Drug Administration carried out a number of scientific studies on yohimbe to determine its potential as an aphrodisiac. The researchers found that yohimbe was actually a powerful and effective aphrodisiac, especially for men. These studies also showed that yohimbe helps to increase the feeling of touch and pleasure.

Yohimbe has been one of the most popular supplements for men and women for years. After ingestion, the body turns it into yohimbine and assimilates it into the bloodstream. Yohimbine, an alkaloid, is the main active ingredient of johimba.

Why should you take Yohimbe?

Its popularity has been inspired not only by aphrodisiac effects, but also by new research showing that it can be a herb with very effective antioxidant potential. Studies show that it is a vasodilator, which means that it increases blood flow to the extremities and appendages. In other words, it can effectively treat male impotence and also increase sex drive (libido) in men and women.

In addition, yohimbine has been shown to prevent blocking or blockage of the arteries and causes myocardial dysfunction or strokes. Yohimbe not only helps men achieve sexual performance, improves libido and helps prevent heart attacks, but also yohimb has been shown to reduce fat synthesis in the body by boosting fatty acid mobilization.

What scientific research provides evidence to support this?

In a double-blind study involving 182 men with erectile dysfunction, 42 mg of yohimbine was administered daily. Within a month, 34% of participants reported full recovery of sexual function and 24% reported a partial response.

In another study of 48 men experiencing impotence, 46% reported improvements in sexual functioning, and in a study at the University of York at Stanford University, subjects experienced a 90% increase in sexual desire in less than one hour.

Finally, in an older German study from 1977 conducted on Yohimbe using 86 patients with erectile dysfunction, 30 mg of yohimbine was given every day for eight weeks. 71% of participants responded positively to the overall improvement in sexual function and libido.

How much should I take? Are there any side effects?

People taking yohimbe should avoid foods containing tyramine, such as cheese, red wine or liver. Tyramine is a substance found in foods such as cheese, liver and red wine. These foods should not be consumed while taking yohimbe. In addition, antidepressants such as Prozac should be taken in combination with Yohimbine only under close medical supervision.

1 capsule 1-2 times a day on an empty stomach 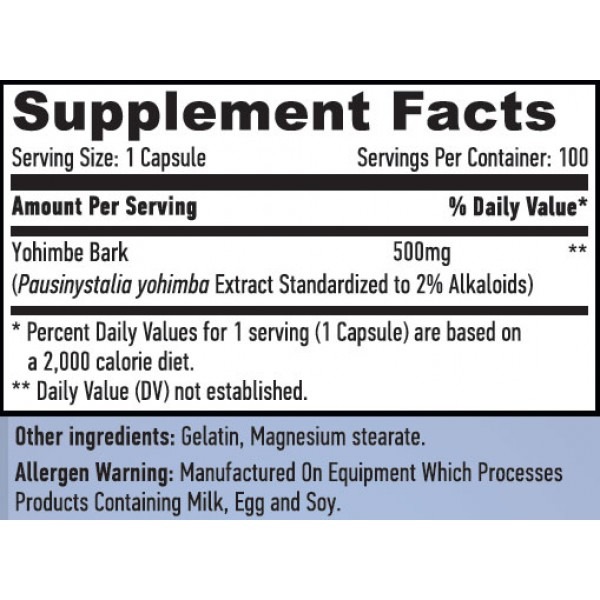