The most effective pre-training booster increasing the building of muscle mass with nootropic properties!

Freak Show Elite Freakz is a new strong pre-workout containing stimulants and ingredients with nootropic properties. The supplement was developed on the basis of the most effective ingredients needed to achieve amazing sports results and increase muscle mass. This is one of the strongest pre-workout supplements with the addition of smart drug.

Contains Dynamine ™ - a patented form of methylolberin, which has a great influence on mood, higher energy, focus and motivation. Kigella plant extract reduces pain and allows you to perform long and intense training sessions. This is a strong pre-workout that will provide you with mental support, increased endurance and a large dose of energy. It is recommended for people who perform strenuous, intense workouts requiring full concentration.

Choline - is a substance necessary for the proper functioning and construction of every cell in our body. It occurs in the body in compounds called phospholipids, the best known and the most abundant of them is lecithin. Phospholipids have many functions in our body, build cell membranes and act as transmitters in the nervous system (most likely they are involved in "creating" memory). An important function of choline is its participation in the transport and metabolism of cholesterol and other fats - it reduces their deposition in the vascular wall and gall bladder, and also affects the functioning of the liver (also reducing fat deposition) and kidneys (regulates the amount of urine excreted).

Caffeine - has a thermogenic effect and suppresses appetite due to the increase in the production of adrenaline and noradrenaline. It has been proven that it causes an increase in the formation of neurotransmitters such as dopamine, acetylcholine or even serotonin in the central nervous system, which exerts a stimulating effect and increases cognitive functions. The overall effect of caffeine on the body allows you to maintain the effectiveness of training and maintain a positive mood, despite the caloric deficit.

L-Theanine - shows psychoactive properties because it easily crosses the blood-brain barrier. It stabilizes the mood, calms down, relieves symptoms of stress and anxiety. Also used as a nootropic agent - improving cognitive functions, work efficiency and learning efficiency. Researchers have proven the effectiveness of Theanine in increasing concentration, alertness and productivity, and the effects are already visible within the first hour after administration.

Dynamine - Its molecular structure is similar to that of an axrin (also known as TeaCrine®) and is believed to behave in a similar but more intense way in the body. Like acryin, methylliberin markedly increases energy, mood, and concentration by activating dopamine receptors and other key neurotransmitters, inhibiting adenosine receptors, all without increasing blood pressure.

Kigelia Africana Extract - an African extract with a stimulating effect. It stimulates the central nervous system, increasing energy, and increases the activity of neurotransmitters. It also has a mild analgesic effect, increasing the pain threshold and extending training sessions.

Bioperine - the active ingredient of black pepper, has a thermogenic effect. It can increase the blood supply to the digestive tissues, resulting in a better digestibility of food ingredients. It significantly improves the bioavailability of many active ingredients of the Freak Show supplement. 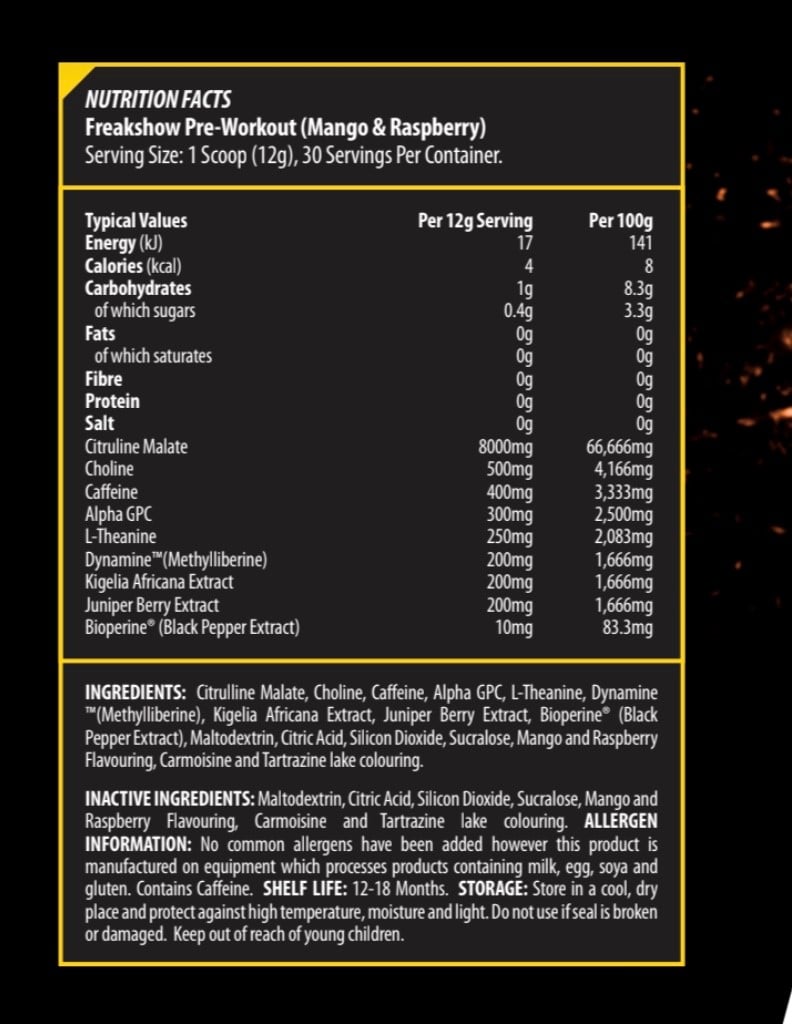