It is a new, high-quality thermogenic fat burner that contains ingredients that lift the mood. The formula based on properly selected thermogenic and lipolytic ingredients will allow you to achieve your dream figure. For beyond driven intensifies lipolytic processes by stimulating the release of adrenal and tyrosine hormones. The effect of the preparation is to stimulate the body to act and mobilize to use body fat during training. Another advantage is that the product reduces appetite. Summing up, For beyond is a powerful burner that not only effectively burns fat but also increases energy and focus during training.

Panthergy ™ - N-Methylpentyl-iminoglutaric Acid - the compound belongs to the category of neurotransmitters, which is used to increase your mood and ensure the balance of the body. Panthergy ™: is one of the strongest neurotransmitters in the brain. The ingredient helps to improve mood, increases well-being and concentration and evokes a feeling of euphoria

Cafffeine Anhydrous - is an anhydrous form of caffeine from the group of organic compounds. It blocks the adenosine receptors in the brain, which results in eliminating the feeling of tiredness during training. Due to its thermogenic action, it effectively burns fat and improves metabolism.

Synephrine-Synephrine has a similar structure to ephedrine. It is obtained in a natural way, from immature citrus fruit, e.g. Citrus uranium L., Citrus aurantium L. This substance is a natural substitute for ephedra. Increasingly, it is added to drugs and dietary supplements intended for athletes as well as overweight people. Synephrine is a phenylephrine isomer. The compound increases metabolism, decreases appetite while increasing mental and motor activity. Generates a willingness to work and physical activity which is beneficial for athletes. In addition, the substance increases mental and physical performance. Synephrine stimulates the sympathetic system, so it works sympathetically, just like adrenaline, tyramine or ephedrine. The main difference between the effects is that ephedra acts mainly on the alpha-1, beta-1, beta-2 and beta-3 receptors, and synephrine acts on the alpha-1 receptor. It also affects the beta-3 receptor, which causes lipolysis (fat breakdown) with the simultaneous start of thermo genesis. Synephrine increases blood pressure and affects the minute volume of the heart. It widens the bronchi to facilitate breathing, effectively clears the sinuses and improves well-being.

Halostachine-strong stimulant, due to its structural structure and action is often compared to ephedrine. It stimulates the secretion of adrenaline and noradrenaline, increasing exercise capacity. Accelerates heart activity, increases cardiovascular capacity, intensifies energy processes. It increases the strength and endurance of muscles, and also positively affects motor coordination. It also has the ability to intensify lipolysis and stimulate cognitive functions

Octopamine - a natural substance originating from the bitter orange fruit. It has the properties modulating the adrenergic system. It has a stimulating effect on beta-3 adrenergic receptors, which results in the breakdown of fat cells in the body. In sports supplementation it is used in fat burners and pre-workout supplements due to its thermogenic and lipolytic properties. The substance also effectively inhibits the appetite.

N-Methyl L-Tyramine - a compound extracted from the fruit of bitter orange or barley. N-methyl-tryamine (NMT) is formed by adding a "methyl" group to a well-known biogenic amine, L-Tyramine. No, this is not a synthetic ingredient. Plants can actually produce NMT with tyramine N-methyltransferase enzyme. Extracting NMT from plants is cheaper than synthesizing NMT. Its action is based on the stimulation of beta receptors, which play a significant role in the fat burning process. In addition, the compound exerts an anabolic effect, increases blood flow to the muscles and increases the cell's efficiency in burning glucose. Another important advantage is that it improves the functioning of the brain - Increases the amount of neurotransmitters, so you think faster and react in a fraction of a second. This is very useful especially in sports competitions.

Rauwolfia Vomitoria Root Extract - shows antioxidant, anti-inflammatory, analgesic properties, supporting carbohydrate and insulin metabolism and improving mental condition. High standardization of the rauwolscine extract, in other words, yohimbine or isohimine, focuses the action of the product on the nervous system and the loss of unnecessary body weight. Inhibiting the operation of the cholinergic system, it increases the adrenaline concentration, stimulating the body to function and intensifying the lipolysis process. Strengthening the oxidation of fatty acids in the mitochondria. It promotes the burning of previously stored adipose tissue in areas of the body rich in α2-adrenergic receptors, mainly the lower abdomen and on the hips. 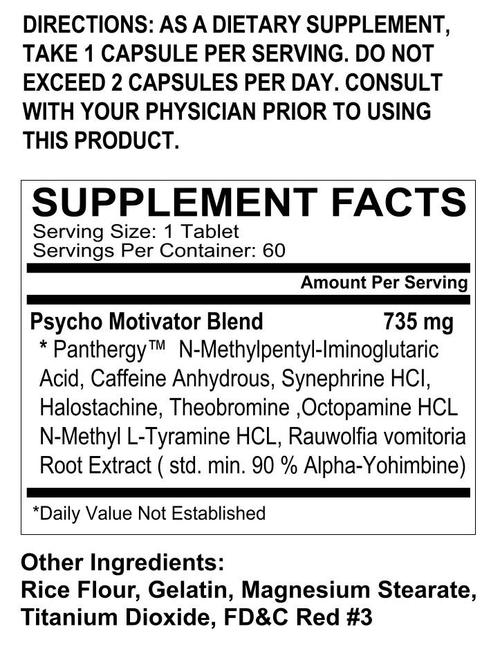 Users reviews
Number of reviews: 1 Average score: 5.00
Score:
Author: Simon, B10 0AB
I recommend 100% works well
To rate this product or to add a new review, you need to log in.
Recommended