Caffeine Anhydrous - causes blocking of adenosine receptors in the brain, which results in the reduction of tiredness during training. Due to its thermogenic effect, it effectively burns fat and improves metabolism.

Cocoa Seed Extract - obtained from cocoa beans; contains theobromine - a purine alkaloid, which in combination with polyphenols and caffeine increases the thermogenic potential, allowing you to increase energy expenditure and accelerate the reduction of body fat.

Di-Caffeine Malate - stimulates the central nervous system and vegetative centers: respiratory, vasomotor and vagus nerve. It also has an excellent thermogenic effect, converting calories to heat, significantly increasing the metabolic rate. It evenly stimulates the cerebral cortex, which means increasing thinking efficiency and preventing fatigue. It reduces the risk of liver and colorectal cancer, and also stimulates the release of fatty acids into the bloodstream, making it one of the ingredients that accelerate slimming.

Lotus Seed Extract - Nelumbo nucifera extract used before training improves concentration and adds energy. Much scientific evidence confirms the effect of higenamine as a powerful fat burner. This substance is also a bronchodilator and causes bronchodilatation and bronchiolitis, reduces airway resistance and increases airflow to the lungs.

TeaCrine-is an alkaloid that structurally resembles caffeine and also activates similar signaling pathways. Under natural conditions, theacrine is most likely synthesized from caffeine and then stored. It is believed that this substance is in the highest concentration in Chinese tea Camallia sinensis, where it is found next to caffeine and theobromine. This substance effectively increases the level of energy in the body, and its action is very similar to caffeine with the difference that it works much longer, shows a slower increase in tolerance and does not cause unpleasant effects. In addition, the substance does not increase blood pressure.

P-Synephrine has a similar structure to ephedrine. It is obtained naturally from unripe citrus fruits, e.g. Citrus uranium L., Citrus aurantium L. This substance is a natural substitute for ephedrine. It is more and more often added to medicines and dietary supplements intended for athletes as well as overweight people. This compound boosts metabolism, reduces appetite and at the same time increases mental and motor activity. Synephrine increases blood pressure and affects cardiac output. It widens the bronchi making it easier to breathe, effectively clears the sinuses and improves mood.

Bacopa Leaf Extract - stimulates the nervous system - especially the limbic system, which includes the hippocampus responsible for memory processes. It also works as an antispasmodic, anti-epileptic, analgesic and anti-stress (adaptogenic) - suppressing nervous tension and typical distraction. Restores harmony and brings relief to depression. It enhances learning and memory processes, improves concentration and stimulates the formation of new nerve connections. Prevents prostatic hyperplasia. The compounds contained in the plant also support the processes of cell renewal and regeneration, and also stabilize the structure of cell membranes.

Yohimbe Bark Extract - a substance that is helpful in the fight against refractory adipose tissue, mainly located in the chest and lower waist area in men, as well as hips, buttocks and thighs in women. Yohimbine works by blocking α2 receptors, which clearly facilitates slimming and is helpful in carving slimming-resistant body parts. It is worth remembering that the effect of yohimbine effectively reduces insulin. So taking this compound around carbohydrate meals is pointless. Yohimbine is particularly effective when used on an empty stomach, before exercise.

Bioperine- is certainly one of the best ingredients. The goal of bioperine is to increase the bioavailability of other ingredients and enable proper absorption of all of them, so that you can get the best results and maximize the time spent in the gym. 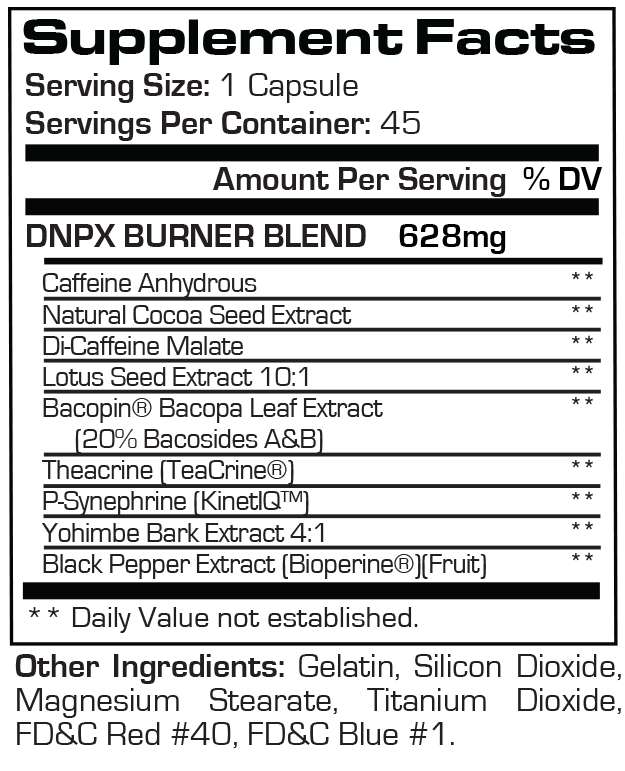