Killer Labz Destroyer is an extremely effective pre-workout agent that allows the creation of an extremely impressive muscle pump, while supporting cognitive function and improving concentration. By increasing overall vitality and strongly motivating the body to operate, it creates solid foundations for above-average training. Additional properties supporting the improvement of body composition, promote the construction of a strong, athletic figure.


Destroyer includes, among others:

Citrulline malate - Participates in the synthesis of nitric oxide (NO) and phosphocreatine and aerobic glucose metabolism, thereby increasing the uptake of oxygen, glucose, amino acids and creatine and energy production through muscle cells. It reduces the concentration of lactic acid and ammonia in the muscles, allowing the body to recover energy faster by increasing the level of creatine phosphate and resynthesis ATP. Citrulline malate is a much more effective form than high doses of arginine, as it is its precursor. At the same dose as arginine is more effective in increasing its amount in the body than arginine alone.

Agmatine - increases blood flow, supporting the process of "cleansing" of working muscles. In every cell there is a specific exchange of oxygen and nutrients for carbon dioxide and harmful metabolic products that the body needs to remove, and due to the increased blood flow, such exchanges take place faster so that the cells of muscle tissue can work longer and harder. Arterial blood contains essential muscle oxygen and provides nutrients such as amino acids, sugars, creatine, arginine from the outside. Thanks to the action of nitric oxide, the transport of the body is more efficient, thanks to which not only the cells receive nutrients but also the harmful metabolic products are removed more quickly.

L-Tyrosine - drastically enhances the action of the supplement when it comes to secretion of adrenaline! With this combination of ingredients, you will maximize the intensity and energy and experience a better focus and clarity of mind.

Anhydrous caffeine - the most-known stimulant compound in the world. It has a stimulating effect, lowers the level of Adenosine, inhibits the breakdown of cAMP.

DMPA - acts as a neuromodulator on the central nervous system, giving many benefits to cognitive functions. Provides effects that improve mood by increasing the level of dopamine and nor-adrenaline in the body. Dopamine is responsible for increasing the sense of well-being, and therefore DMPA provides a euphoric effect, and at the same time reduces the feeling of anxiety. Dopamine and noradrenaline are also associated with increased mental alertness and concentration.

N-Methyltyramine - raises the level of catecholamines, especially: dopamine, norepinephrine and acetylcholines, eliminating lethargy and mobilizing the body to make a given effort. By increasing the amount of gastrin, pancreatic juice and gastric acid, it improves appetite and improves digestion and assimilation processes. It also inhibits excessively accelerated lipolysis process. 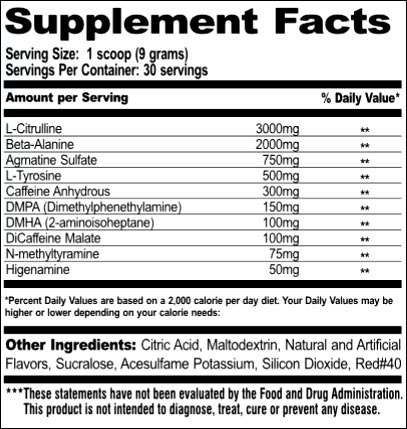