Cannibal Inferno AMPed is a new version of an extremely effective fat reducer that helps you regain energy, increase your resting metabolism, burn more calories. Cannibal Inferno AMPed was created to destroy fat cells and extreme support of weight loss by increasing thermogenesis and mobilizing the body to use body fat as a source of energy.

The Cannibal Inferno AMPed includes, among others:

Acetyl L-carnitine (ALC) - an acetylated derivative of L-carnitine, a non-protein amino acid formed in the human body from methionine and lysine. L-carnitine is most often associated with the transport of long-chain fatty acids to mitochondria and the elimination of toxic in excess of fatty acids with medium and short chains. As the donor of acetyl groups, it allows the formation of acetylcholine, necessary for the proper functioning of the nervous system. It has neuroprotective, neurotrophic and antidepressive effects. It demonstrates long-term analgesic properties in the peripheral nervous system. Supports learning processes. By optimizing the acetyl-CoA ratio to CoA, it optimizes the functioning of the Krebs cycle, and thus is responsible for balancing the energy processes. By enhancing the reduction of lactic acid, it supports the alkalis of the body. It fights reactive oxygen species, eliminates lipid peroxidation processes, chelates some transition metals, and thus demonstrates antioxidant properties. Stabilizes cell membranes, including erythrocytes and blood vessels. It affects the improvement of the functioning of many organs, including the heart or liver. The acetylation process to which L-carnitine has been subjected improves its bioavailability and introduces an additional acetyl group to the body.

Caffeine - 1,3,7-trimethylxanthine, a compound belonging to purine alkaloids found in selected parts of some plants associated with excitatory activity, especially coffee seeds. As a selective antagonist of A1 and A2A adenosine receptors, by increasing the amount of some neurotransmitters, particularly acetylcholine, noradrenaline and dopamine, it leads to improved concentration, reduced pain and increased willingness to act. By lowering the phosphodiesterase activity, cAMP reduces the rate of degradation of 3 ', 5'-cyclic adenosine monophosphate (cAMP), maintaining the correspondingly high neuronal excitability required to maintain full clarity of thought. Increased concentration of cAMP intensifies the degradation of glycogen and triglycerides, enhancing the availability of energy substrates required for the course of thought processes and other processes, including those related to the physical activity of the body. Caffeine causing the reduction of the negative electrical potential of the internal mitochondrial membrane and inducing the formation of uncoupling proteins (UCP), enhances thermogenesis by increasing the burning of released energy substrates, helping to maintain normal body mass.

4-Amino-2-Methylpentane Citrate - otherwise 1,3-dimethylbutylamine (DMBA) or 4-amino-2-methylpentane (AMP), most commonly found in the form of citrate. DMBA is structurally similar to 1,3-dimethylamylamine (DMAA) and a similar effect is assigned. The mechanisms of its action are little known due to the short history of its use in supplementation. Nevertheless, due to its effectiveness, it has been accepted on the market as an effective means of increasing concentration, focusing and improving cognitive processes. It probably does this by affecting the release of relevant neurotransmitters. In addition, DMBA accelerates the process of disintegration and burning of excess body fat.

Green coffee bean extract - coffee bean extract, plants from the Marzena family, growing in the subtropical climate of the tropic zone, in the areas of: Africa, Asia and South America. Non-roasted grains are primarily sought after in caffeine and chlorogenic acid, a compound that is unstable at very high temperatures. Green coffee has antioxidant, anti-inflammatory, analgesic, antidiabetic, cardioprotective, neuroprotective and chemoprotective effects. Chlorogenic acid and caffeine present in green coffee are involved in the regulation of glucose and lipid metabolism, favoring the slimming process. Activating AMPK, they intensify the metabolism of energy components. By increasing the expression of carnitine acyltransferase (CAT) and acyl-CoA oxidase (ACO), inhibiting the activity of fatty acid synthase (FAS), they interfere with lipid metabolism processes. In addition, chlorogenic acid stimulates the release of insulin, while at the same time lowering the insulin resistance level and improving glucose tolerance. By inhibiting the action of α-amylase and α-glucosidase, it suppresses intestinal glucose uptake by reducing blood glucose levels.

Hordenine - an amine formed from l-tyrosine, has an effect similar to e-ferrin, contributes to the intensification of thermogenic processes, can also increase the production of dopamine.

Evodiamine - an alkaloid derived from the plant Evodia Rutaecarpa. Evidence is attributed to various properties, but its influence on the activity of hepatic enzymes in the liver metabolizing certain chemical substances is important. What does it mean? This means that when you administer ruticotipine with other substances, you can achieve higher plasma concentrations than when administered without this supplement. In addition, in scientific studies, this alkaloid has been shown to increase the vasodilating effect of nitric oxide, probably by affecting the level of calcium ions in cells, but the mechanism is not fully understood.

Synephrine - stimulates the sympathetic nervous system, so it works sympathetically, just like adrenaline and tyramine, or ephedrine. Ephedrine mainly works on the alpha-1, beta-1, beta-2 and beta-3 receptors. Synephrine has an effect on the alpha-1 receptor. It also acts on the beta-3 receptor, which causes lipolysis (fat breakdown) with the simultaneous start of thermogenesis. Synephrine is a natural substitute for ephedrine. It is increasingly being added to drugs and supplements intended for athletes and obese people. Manufacturers even boast that they have an ephedrine-like preparation, which is free of real ephedra. 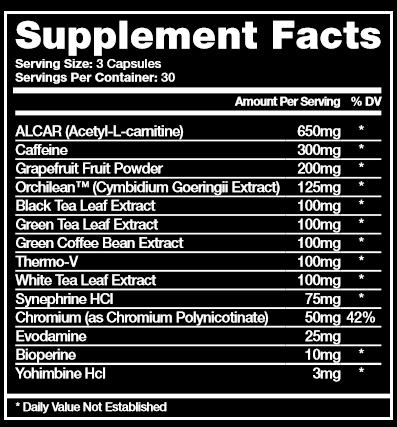