Chaos & Pain Cannibal Genius is a new mind booster with nootropic effects. The supplement is recommended for people struggling with a high mental and physical burden on a daily basis. It perfectly improves memory and concentration, and also reduces the feeling of fatigue during the day. It is extremely helpful in the rush of duties when your brain needs support. This supplement accelerates learning, improves memory, association and logical thinking. Genius improves the work of receptors and increases sobriety.

Cannibal Genius is a supplement that allows you to work in full concentration, increasing your ability to think and concentrate. The mind booster is recommended during learning and increased mental work. It is also a proven addition to daily training sessions where concentration and increased alertness are required to perform the correct training.

Chaos and Pain Genius includes, among others:

Alpha GPC - increases the synthesis of acetylcholine in the brain. In this way, it strengthens the cognitive functions of the brain, while having an influence on the increased ability to concentrate and the process of remembering.

Lions Mane - lion's mane. It has been used as a natural nootropic for centuries. Especially widespread in China, where it was used to increase cognitive functions, improve mood and alleviate symptoms of memory loss. Lion's Mane Mushroom increases nerve growth factor production. The peptide promotes the growth of brain tissues, including dendrites.

Beta-Phenylethylamine - an organic chemical compound that occurs in a natural form (e.g. in chocolate) and synthesized in the human body from the amino acid I-phenylalanine. As a neurotransmitter and neuromodulator, it affects the nervous system, increases the amount of dopamine and noradrenaline.

Rhodiola Rosea - a plant that belongs to the group of adaptogens, plants that help the body adapt to high mental and physical stress. It is also known as arctic root or golden root. It contains over 140 active ingredients, the two most important of which are rosavin and salidroside. Rosavins and salidroside increase the level of serotonin and dopamine in the brain. Additionally, they lower the level of adrenal hormones, such as glucocorticosteroids and cortisol. These hormones are produced by the glands under stress. Both ingredients stimulate the synthesis of endorphins called the happiness hormone. Rosavins perfectly improve mood, increase concentration, improve memory and promote cognitive functions. The main action of Rhodiola is to relieve fatigue, improve concentration and improve mood. All this translates into better results both at the gym, as well as at work or school.

Bacopa Monnieri - gently stimulates the nervous system, especially the limbic system, which includes the hippocampus responsible for memory processes. It also acts as a diastolic, anti-epileptic, analgesic and anti-stress (adaptogenic) - relieving nervous tension and typical distraction. It restores harmony and brings relief from depression. It enhances learning and memory processes, improves concentration and stimulates the formation of new nerve connections. It prevents the hypertrophy of the prostate gland. Compounds contained in brahmi also support the processes of cell renewal and regeneration, and stabilize the structure of cell membranes.

Caffeine Anhydrous - caffeine has a thermogenic effect and suppresses appetite thanks to the increase in the production of adrenaline and norepinephrine. It has been proven that it causes an increase in the formation of such neurotransmitters in the central nervous system as dopamine, acetylcholine or even serotonin, which exerts a stimulating effect and increases cognitive functions. The overall effect of caffeine on the body allows you to maintain the effectiveness of training and maintain a positive mood, despite the caloric deficit.

L-Theanine - is a completely natural ingredient with nootropic properties (and not only), which is completely safe to use. An excellent alternative to pharmacological substances that improve brain functions. When used with caffeine, it can drastically improve learning efficiency, attention, and work efficiency and productivity. A component of the Genius Chaos & Pain supplement intended for people who live in constant stress (relaxes, calms down), as well as people looking for safe solutions that will improve brain functions and memory. 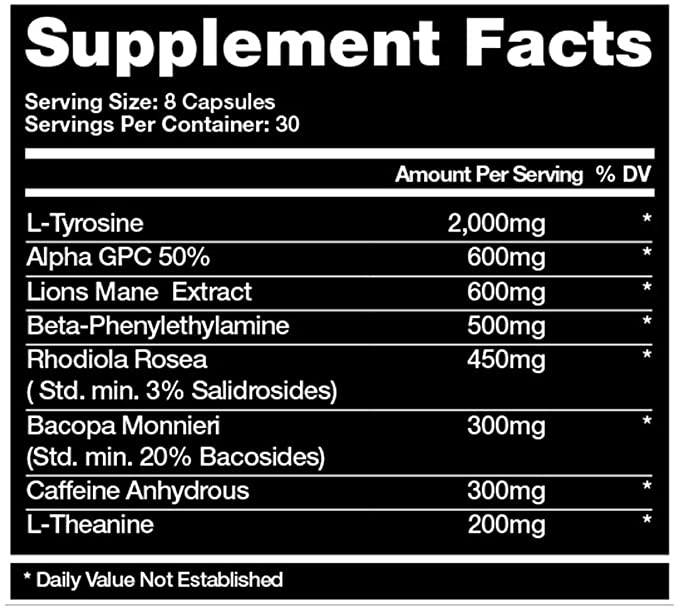