BullDoze has a positive effect on the level of hormones, which leads to an improvement in the concentration of GH, free testosterone in the blood. The preparation is recommended as an addition to the diet of every athlete, ideal for combating a stressful, intense lifestyle, regulating the hormonal balance in the body and promoting the overall health of athletes.

Bull Doze is a supplement for hard training athletes to not only help you achieve deep and restful sleep, but also boost hormone levels and speed up recovery. The ingredients contained in the supplement ensure a significant increase in libido. Improving the quality of sleep and the level of growth hormone allows you to fight persistent fatty tissue (especially around the abdomen).

Melatonin (N-acetyl-5-methoxytryptamine) - an organic chemical compound is a tryptophan derivative that acts as a 'sleep hormone' in the human body. It is produced in the pineal gland, more specifically in special cells called pinealocytes. Melatonin is somewhat related to another important neurohormone, serotonin. In a few chemical reactions, serotonin turns into melatonin when needed (and under the right conditions). Melatonin can also be used in shift work - when you have to go to bed at unusual hours, or when 'hours are shifted' in the case of the Jet Lag phenomenon. Melatonin is a powerful antioxidant - it reduces oxidative stress and thus prevents cell death. It is extremely important for the Central Nervous System, where it is present in the highest amounts - it prevents damage to neurons and stops neurodegenerative diseases. The use of melatonin has no side effects.

Velvet Bean Extract - medicinal plant; Its seeds contain levodopa, which is a direct precursor to dopamine and an effective drug in the treatment of Parkinson's disease. It improves well-being and increases activity, resulting in increased exercise capacity and sexual function. Effectively increases the possibilities of dopamine synthesis. This amazing neurotransmitter is an extremely important element for the proper functioning of the nervous system and the flow of nerve signals.

Colostrum - contains a very condensed, powerful dose of immune and growth factors. It compensates for the deficiency of the growth hormone IFG-1, for people exercising it has an impact on the growth of lean muscle mass. It reverses the aging process, which may result in a "natural lifting" effect - tissue regeneration, rejuvenation and firmness of the skin.

Maca Root Extract - Peruvian pepper extract (Lepidium meyenii), rich in a natural composition of amino acids, fatty acids, vitamins (including B1, B2, B3, B12, A, E, C) and minerals (copper, zinc, manganese , iron, selenium, boron, phosphorus, magnesium, calcium, sulfur, selenium) and sterols. The product is dedicated to people who are physically and intellectually active, with a high temperament. The maca root belongs to the group of substances called adaptogens. Adaptogenic activity is based on alleviating and counteracting the effects of physical and mental stress caused by harmful factors from the surrounding environment. Adaptogens regulate the state of the central nervous system, they can increase the level of the body's adaptation to heavy physical effort and mental work, and help maintain homeostasis.

Sum Root Extract - The plant extract increases the level of sex hormones such as estradiol, progesterone and testosterone.

Zinc - is a trace element, plays a major role in the processes of cell growth regulation, tissue repair, as well as keeping organs in perfect condition. Keeps the immune system in good shape - increases resistance to infections. Zinc has a stimulating effect on the production of male sex hormones. Its deficiency is often found in infertile men (it has a positive effect on sperm production).

Magnesium - is essential for maintaining electrolyte balance, energy production and the functions of the nervous system, including brain-muscle coordination. Plays an important role in the process of muscle contraction (e.g. heart). It takes part in the initial stages of the synthesis of sex hormones (DHEA). 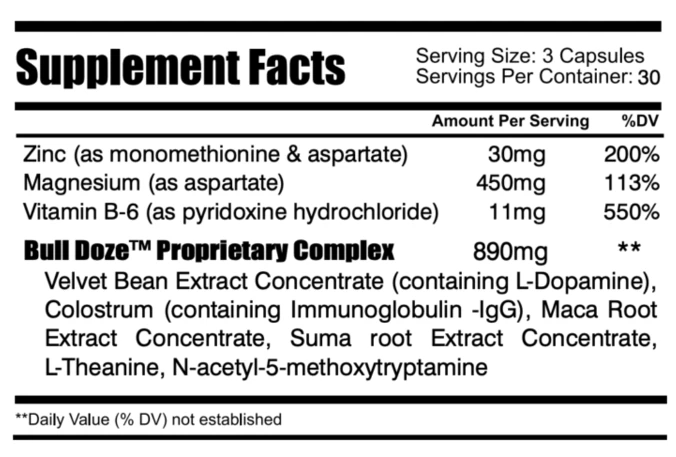