Redcon1 Breach Ballistic is an amino acid product that was created with the participation of the best specialists in the supplementation industry. The comprehensive formula has a significant effect on performance - improving them to the limit. Breach Ballistic contains essential nutrients for the production of nitric oxide, which is an important element of building large, firm muscles in a short time. In addition, it includes 50 mg (per serving) of stimulating caffeine so that your workouts will be more effective.


The product includes substances such as:

L-Leucine - affects the synthesis of skeletal muscles in several ways: increases the secretion of insulin, a powerful anabolic present in our body, affects the protein kinase S6 activity, accelerates the phosphorylation of the binding protein eIf4E and affects the degree of binding between proteins (eIF) 4E and eIF4G. All this, despite complicated sound and naming, boils down to a very simple assertion - Leucine increases the degree and speed of protein utilization for muscle building.

L-Isoleucine - the supply of large amounts of Leucine reduces the level of the remaining two amino acids: Isoleucine and Valine, so it is important to use all three compounds together. In addition, Isoleucine is classified as glucogenic amino acids, ie those that the body can easily and quickly transform into the energy necessary for its functioning. This means that we will be able to not only train longer and more intensively, but also recover faster.

L-Valine - its presence in this combination, thanks not only to the aforementioned need to administer all three BCAA amino acids together but also to reduce the fatigue of the central nervous system. In addition, as with the other two amino acids, it is easily converted into the energy consumed by working muscles and thus allows to save glycogen stores accumulated in the liver.

Glycerol - is a compound that occurs naturally in our body. Its main function is to regulate the level of fluids in tissues and blood. The benefits we derive from this phenomenon are: improved absorption of compounds taken together with Glycerol, faster delivery of nutrients to cells, more anabolic environment, more visible use (associated with the movement of water from space, between muscle cells, into the blood) and more noticeable " pump effect "during trainings.

Taurine - It has the ability to activate GABA receptors in the brain, thanks to which it can reduce some of the unwanted side effects of taking stimulants. It affects the health of the nervous system, increases the metabolism of glial cells. It intensifies fat emulsification, has anti-diabetic properties, can improve the fight against free oxygen radicals, strengthens the heart's contraction force.

Choline participates in the creation and maintenance of normal cell structure, control of muscle function, respiratory system, heart function and brain memory work. According to the research, choline improves long-term memory. Some specialists argue that a diet containing a large amount of available choline (egg diet) may reduce the risk of dementia, dementia characteristic of Alzheimer's disease. Choline also ascribes a role in reducing the risk of developing cancer.

Theobromine is a compound known from the popular yerba mate, showing diuretic action, which helps in getting rid of excess water from the body, masking the effects of reducing body fat. In this way Breach Ballistic directly influences the increase of the aesthetics of the body by maximizing the muscle definition. In combination with caffeine, theobromine also has a thermogenic effect, accelerating the reduction of adipose tissue.

Anhydrous caffeine - the most-known stimulant compound in the world. It has a stimulating effect, lowers the level of Adenosine, inhibits the breakdown of cAMP.

Dicaffeine Malate - is characterized by very good solubility (better than ordinary caffeine). It has a strong antibacterial effect, helps to control microbiological growth and improves efficiency.

To sum up, Redcon1 has created a very complete set of branched chain amino acids whose task is to keep the body in anabolism, so that you can train longer and harder. The addition of Caffeine will intensify the motivation to overcome all barriers, while Theobromine will take care of the aesthetics of the silhouette while using Breach Ballistic.

It is recommended to use 1 portion 15 minutes before physical exercise. 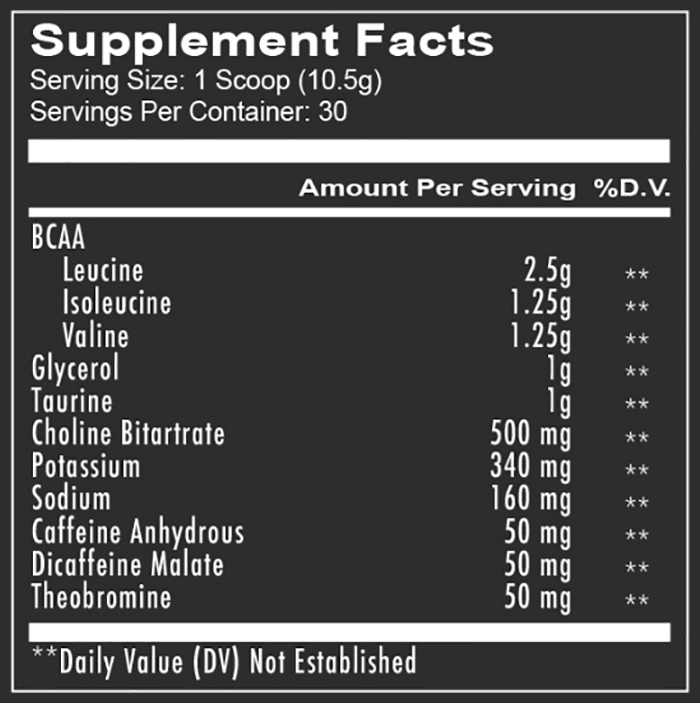