Pre workout Phase One Nutrition Brain Blitz advanced nootropic formula is a combination of pre-workout with a nootropic supplement. A set of proven ingredients provides a powerful boost of energy, motivation and concentration to increase training comfort. Ingredients with a pumping and stimulating effect affect the expansion of blood vessels, increase muscle nutrition, provide oxygen to the muscles, resulting in an increase in the muscle pump.

Supplement rich in such ingredients as: Noopept, Eria Jarensis, Huperznine A definitely improves mental function, improves memory and is a natural antioxidant barrier. Brain Blitz Phase One Nutrition is undoubtedly one of the best nootropic training boosters available on the market.

Citrulline Malate - citrulline malate participates in the synthesis of nitric oxide (NO) and phosphocreatine and oxygen metabolism of glucose, thereby increasing the uptake of oxygen, glucose, amino acids and creatine and energy production through muscle cells. It reduces the concentration of lactic acid and ammonia in the muscles, thanks to which it allows the body to recover energy faster by increasing the level of creatine phosphate and ATP resynthesis. Citrulline malate is a much more effective form than high doses of arginine, as it is its precursor. At the same dose as arginine, it is more effective in increasing its amount in the body than arginine alone.

Beta Alanine - is necessary for the production of carnosine and building blocks that help prevent aging. The compound supports the proper functioning and development of muscles. The amino acid is known to reduce muscle fatigue, which can help your muscles work better during training. This in turn promotes muscle growth. Beta-Alanine is particularly helpful in intensive short-term workouts such as weight lifting. Some people taking beta-alanine may notice a slight tingling sensation known as paraesthesia. Tingling occurs because beta-alanine dilates the blood vessels, allowing more oxygen and blood to be delivered to the muscles.

GlycerSize - a patented, concentrated form of glycerol that provides super hydration of muscle cells for intense, long-lasting workouts. It is a highly hygroscopic substance that binds many water molecules, thus contributing to strong hydration of the body. Hydration of muscle cells provides an optimal environment for anabolic processes and the proper functioning of muscle fibers. Reaching the muscles binds fluids, which makes the muscle more swollen and its efficiency increases.

AlphaSize - is one of two patented choline components in TRANSMIT. We decided to provide choline using two different compounds to ensure maximum absorption. Choline is used to create and protect new brain cells. Choline is transformed by the body into acetylcholine, which is one of the neurotransmitters most involved in processes related to memory formation, retention, recall, mathematical reasoning, verbal thinking, planning and focus.

L-Tyrosine - is a substrate for the production of catecholamines such as noradrenaline, adrenaline and dopamine, and therefore may result in better concentration, greater energy and increased motivation to act. It is also used for the production of thyroid hormones, so it can be useful for people seeking to raise their level.

Theanine - is a non-protein amino acid found naturally in green tea leaves - camellia. Has psychoactive properties because it easily overcomes the blood-brain barrier. It stabilizes the mood, calms down, reduces the symptoms of stress and anxiety. Also used as a nootropic agent - improving cognitive functions, work efficiency and learning effectiveness. Researchers have proven theanine's effectiveness in increasing attention, alertness and productivity, and effects are already visible within the first hour after administration. The researchers believe that theanine is responsible for the relaxing effect of green tea, which affects the intensity of alpha brain waves probably by affecting the activity of some neurotransmitters, including dopamine and serotonin.

Eria Jarensis - acts as a neuromodulator on the central nervous system, giving many benefits to cognitive functions. Provides mood-enhancing effects by increasing dopamine and nor-adrenaline levels in the body. Dopamine is responsible for increasing the feeling of well-being, and therefore the extract from Eria Jarensis provides a euphoric effect, while reducing anxiety. Dopamine and noradrenaline are also associated with increased mental alertness and concentration.

Theobromine - a compound known from the popular yerba mate, showing a diuretic effect, which helps in getting rid of excess water from the body, masking the effects of fat reduction. It directly increases the aesthetics of the figure by maximizing muscle definition. In combination with caffeine, theobromine also has a thermogenic effect, accelerating the reduction of body fat.

DMHA - is a stimulating compound that has other names, such as dmha or octodrine. DMHA works bronchodilator, which increases our aerobic capacity, in addition, it has decongestant activity (narrowing of blood vessels, causing an increase in the rate of oxygen flow), does not cause "stupidity" and sharpens the senses which could not always be experienced with dmaa.

Noopept - is classified as a stimulant nootropic in the area of ​​the central nervous system. Its unique properties lead to an increase in cognitive functions, memory improvement, and faster information assimilation. The compound stimulates the connection between the hemispheres of the brain. Noopept significantly contributes to the increase of creativity, efficiency and better functioning of thought processes. It is a great remedy for use during increased mental and physical activity of the body. It also has a protective effect against the harmful effects of free radicals, protecting neurons from external factors.

Astragin - a patented blend of extracts from bark tragus and false ginseng. It is used in supplementation because of its ability to increase the absorption of other active ingredients. In addition, it can also promote insulin sensitivity, favorably affecting carbohydrate metabolism. In addition, it can show adaptogenic effectiveness, increasing the body's tolerance to stress factors.

Huperzine A - one of the most amazing alkaloids used to increase memory capacity. Hupercin A is one of the most desirable substances from the group of agents providing so-called brain doping. It allows you to achieve maximum concentration, focus and isolate our attention in almost every situation. Perfect for people with very demanding intellectual work as well as students or high school graduates. Unlike many other stimulants acting on our mind, its effect does not weaken over time and we can enjoy the benefits of hupercin supplementation for a very long time. 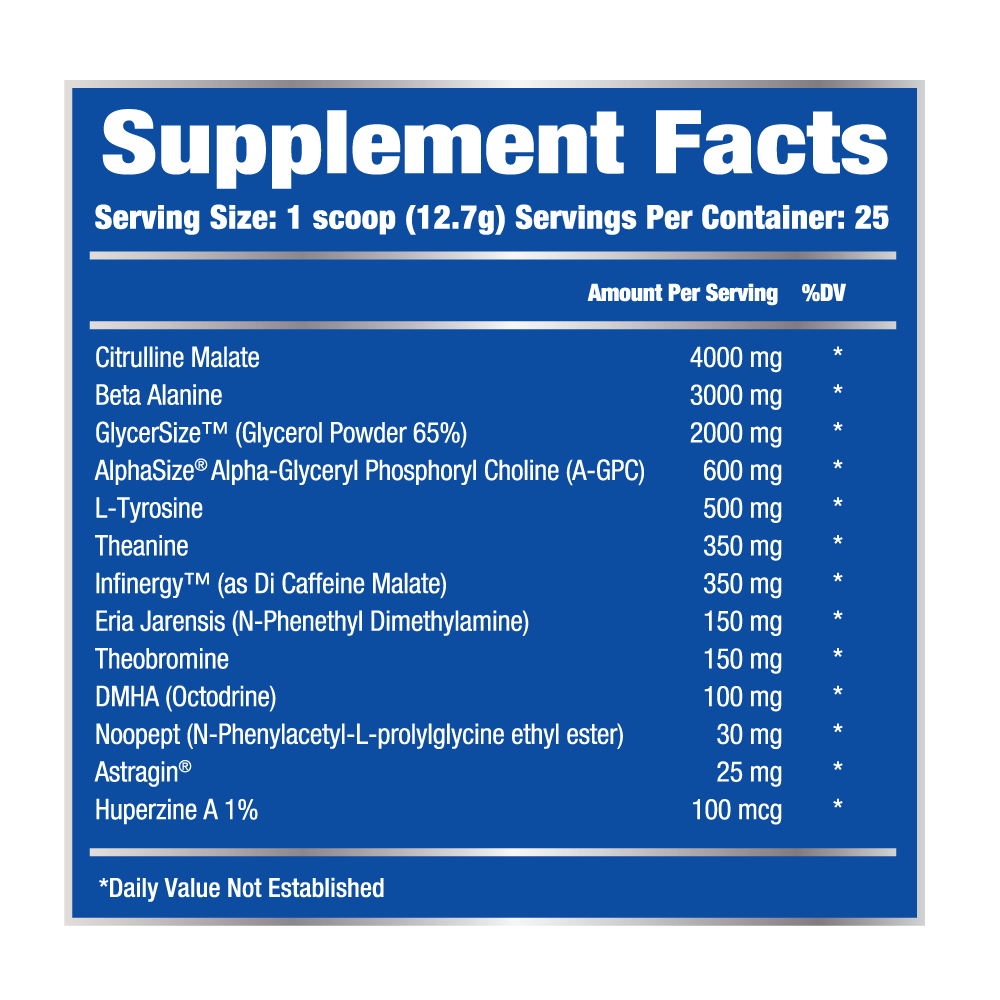 Users reviews
Number of reviews: 3 Average score: 4.67
Score:
Author: IOANNIS, Thessaloniki
Excellent product for athletes and individuals that can’t concentrate. Moreover its ingredients seem not to interact with antidepressants, making it a good dopamine booster
Score:
Author: Juan Jaime, Vigo
Nice laser focus!
Score:
Author: Kristian, Jyväskylä
Good PWO, clean energy and focus, but if you are looking for something that gives more hype, get the K.O variant from these guys.
To rate this product or to add a new review, you need to log in.
Recommended