Iron Maxx BCAA + Glutamine 1200 BCAA capsules with L-glutamine and vitamin B6. A set of key amino acids for the synthesis of muscle proteins and the maintenance of muscle mass. other The supplement is recommended especially for high-intensity workouts. Advanced TriCaps® encapsulation technology.

One dose of 1200 mg! The preparation enriched with L-glutamine (300 mg) is a building block for protein synthesis, especially during the cycle aimed at building muscle mass. Vitamin B6 effectively prevents muscle fatigue and has a positive effect on the functioning of the nervous system.

L-Leucine - affects the synthesis of skeletal muscles in several ways: it increases the secretion of insulin, a powerful anabolic present in our body, affects the activity of the S6 protein kinase, accelerates the phosphorylation of the eIf4E binding protein and affects the degree of connection between proteins (eIF) 4E and eIF4G. All this, despite the complicated sound and nomenclature, boils down to a very simple theorem - Leucine increases the degree and speed of protein utilization to build muscles.

L-Isoleucine - the supply of large amounts of Leucine reduces the level of the other two amino acids: Isoleucine and Valine, so it is important to use all three compounds together. In addition, Isoleucine is classified as glucogenic amino acids, i.e. those that the body can easily and quickly transform into energy necessary for its functioning. This means that we will not only be able to train longer and more intensively, but also recover faster.

L-Valine - its presence in this combination, owes not only to the aforementioned need to administer all three BCAA amino acids together, but also to reducing central nervous system fatigue. In addition, as in the case of the other two amino acids, it is easily converted into energy used by working muscles and thus allows you to save the glycogen stores accumulated in the liver.

L-Glutamine - actively participates in the processes of wound healing and microdamage. This effect in the preparation was additionally enhanced by a powerful dose of taurine, a sulfuric amino acid with antioxidant and anti-inflammatory properties. Scientific research suggests a protective effect of taurine against post-training muscle damage, but also its ability to activate fat energy reserves, thus supporting fat burning. It demonstrates the ability to increase the volume of muscle fibers. It is present in the highest amount in free form, thanks to which it can quickly participate in the processes of protein biosynthesis and inhibition of damage caused by enzymes that contribute to the breakdown of muscle fibers. belongs to the most effective anabolic hormones.

2-4 capsules 30 minutes before and immediately after training. On non-training days, 2 capsules after waking up and 2 capsules at bedtime. 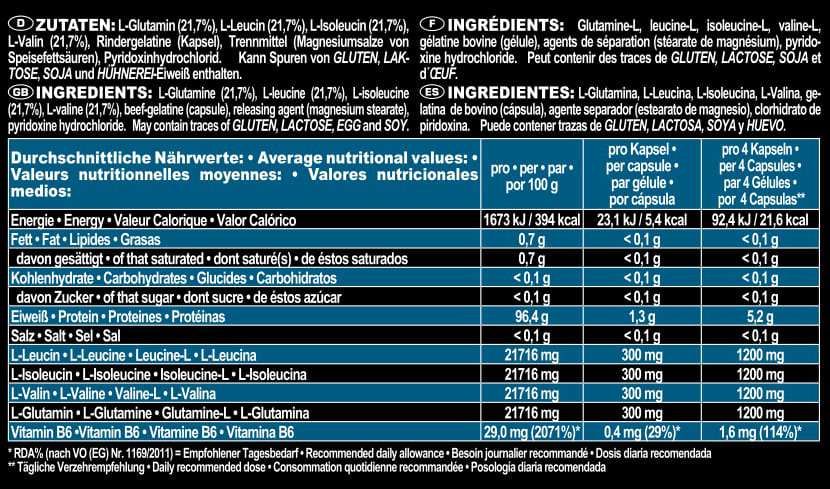