Therm IQ is an advanced fat burner supporting metabolism, allowing you to increase calorie consumption during the day, even without physical activity. Perfect support during a reduction diet. ThermIQ® has been specially designed to reduce body fat while allowing you to maintain as much lean muscle mass as possible.

The combination of the most effective ingredients supporting fat loss and stress-relieving ingredients help promote well-being during the reduction period, inhibit the effect of cortisol and protect muscles against burning. In order to maximize the potential of the burner, we recommend using it away from carbohydrate meals.

Turmeric Extract - turmeric has antioxidant, anti-inflammatory, anti-cancer, anti-angiogenic, antiviral, antibacterial, antifungal, choleretic, choleretic, diastolic, dissolving bile deposits, regulating digestion, stimulating the secretion of juices and digestive enzymes, and anti-hepatoprotective properties. Curcumin, or the yellow pigment of turmeric, is a special ingredient that has a high anti-inflammatory and antioxidant potential. Extensive scientific research has shown that curcumin significantly slows down or completely inhibits the development of cancer cells. What's more, it improves the effectiveness of radiotherapy and chemotherapy, and allows the use of lower doses in these therapies. Its action is especially strong in combination with other antioxidants, such as quercetin.

Creatyl L-Leucine - Creatyl-L-leucine (creatine conjugated with the amino acid L-leucine). The formula, also known as Super Creatine ™, patented by VPX Nutrition, is a combination of leucine and creatine. This form of creatine allows you to maintain high creatine stability and facilitates its absorption by the body. It enables the storage and transport of phosphate groups necessary for the production of high-energy compounds, including adenosine-5'-triphosphate (ATP), ensuring the supply of energy to working and regenerating muscles. Supports the accumulation of glycogen. It increases the storage of water, the presence of which is required for the course of numerous biochemical reactions. It has antioxidant properties that reduce oxidative stress caused by excessive training intensity.

Grains of Paradise - the extract acts agonistically on TRPV1 receptors and increases the production of adrenaline and norepinephrine, promotes lipolysis, thanks to which it releases energy substrates necessary to maintain the continuity of the muscles involved in physical effort. By intensifying the degradation of previously accumulated adipose tissue, increasing the efficiency of thermogenesis taking place in brown adipose tissue. It promotes the appropriate hormonal environment by increasing testosterone synthesis and by acting anti-estrogenic, supports the shaping of the appropriate body composition. By leading to a strong excitation of TRPV1 and TRPA1 receptors, it causes limiting their activity, which reduces the amount of pain experienced.

Theacrine - is an alkaloid that is structurally related to caffeine and also activates similar signaling pathways. Under natural conditions, theacrine is most likely synthesized from caffeine and then stored. This substance is believed to be the most concentrated in Chinese tea, Camallia sinensis, where it occurs alongside caffeine and theobromine. This substance effectively increases the level of energy in the body, and its action is very similar to caffeine, with the difference that it works much longer, shows a slower increase in tolerance and does not cause unpleasant effects. In addition, the substance does not increase blood pressure.

Berberine HCL - due to its properties, it is recommended for people suffering from diabetes or low insulin sensitivity. It is a stimulant for the metabolism of fatty acids, which contributes to weight loss and the reduction of the harmful fraction of LDL cholesterol. Thus, it has very interesting properties conducive to maintaining a very good condition of the circulatory system.

Bio Liquid Cannablast Hemp Oil - bio hemp oil from THC is only characterized by a therapeutic effect. It is recommended as a strong therapeutic agent in the course of civilization diseases and ailments of the nervous system. It has an analgesic and antioxidant effect. Cannabinoids Reduce Pain Sensitivity can help you with strenuous training sessions because you won't be as sensitive to pain signals from your muscles. Using CBD reduces the cortisol level in the body, preventing muscle breakdown.

SuperZine Huperzia Serrata - is one of the most desirable substances from the group of agents providing the so-called brain cheering. It allows us to achieve maximum concentration, focus and isolate our attention in almost every situation. It is perfect for people with very demanding mental work as well as students or high school graduates. Unlike many other stimulants that affect our mind, its effect does not weaken over time and we can benefit from hupercine supplementation for a very long time. Its natural source is Huperzia Serrata, and it is also used to alleviate the symptoms of Alzheimer's disease. It is also responsible for increasing the amount of bioavailable acetylcholine which is necessary in the process of restoring memory.

Alpha Yohimbine HCL - has antioxidant, anti-inflammatory, analgesic properties, supports the carbohydrate-insulin metabolism, prevents cancer and improves mental condition. The high standardization of rauwolscine extract, also known as alpha yohimbine or isoohimbine, focuses the product's action on the nervous system and the loss of unnecessary body weight. By interfering with the work of the cholinergic system, it increases the concentration of adrenaline, stimulating the system to function and intensifying the lipolysis process. By intensifying the oxidation of fatty acids in the mitochondria. It promotes the burning of previously accumulated fat in the areas of the body rich in α2-adrenergic receptors, mainly the lower abdomen and hips.

Yohimbine HCL - yohimbine hydrochloride perfectly improves the performance of athletes. Research shows that it can potentially increase energy expenditure, which contributes to the body's exercise capacity. Taking yohimbine before exercise or on an empty stomach increases the breakdown of body fat. Daily supplementation with yohimbine intensifies the lipolysis process, especially in parts of the body resistant to fat burning in men - abdomen, lower back, in women - thighs and buttocks.

2 capsules a day, away from carbohydrate meals. 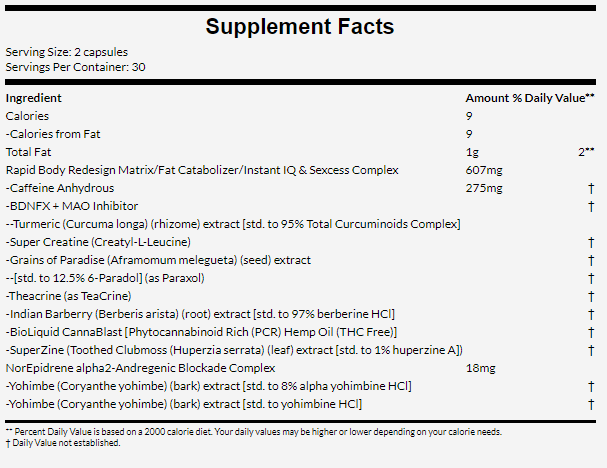