Condemned Laboratoriez Arsyn is a highly advanced composition of effective ingredients that accelerate the reduction of body fat. The product has been developed to maximize the loss of unnecessary kilograms. A properly selected set of thermogenic and lipolytic substances as well as substances stimulating an increase in the metabolic rate not only reduces the fat and suppresses the appetite, but also has an energetic effect.


Formula Arsyn consists of up to 16 synergistic ingredients that guarantee success in the fight against excess kilograms. Arsyn includes, among others:

Anhydrous caffeine - the most-known stimulant compound in the world. It has a stimulating effect, lowers the level of Adenosine, inhibits the breakdown of cAMP. It supports lipolize body fat.

2-Aminoisoheptane (DMHA) - is a stimulant that has other names such as 2-aminoisoheptane or octodrine. DMHA has a relaxant effect on the bronchi, thanks to which our aerobic capacity increases, moreover it has decongestant activity (narrowing blood vessels, causing an increase in the oxygen flow rate), does not cause "stupor" and sharpens the senses that could not always be experienced with dmaa.

White Willow Extract - a rich source of salicylin - a substance with strong analgesic, antipyretic and anti-inflammatory effects, sometimes called natural aspirin. It contributes to the reduction of fatigue, post-workout ache, neutralization of inflammation, cleanses the body of toxins and has a diaphoretic effect.

L-Tyrosine - drastically enhances the action of the supplement when it comes to secretion of adrenaline! With this combination of ingredients, you will maximize the intensity and energy and experience a better focus and clarity of mind.

Noopept - Increases the performance of the brain, and problems with concentration remain only a thing of the past! Thanks to the use of noopept, you will improve your memory and concentration, gain energy, and increase the ability to think logically. Thanks to this you will become extremely focused, fast and effective!

Synephrine hcl - Another stimulant substance, a perfect complement to caffeine, dmha and yohimbine. It has specific properties of prolonging the lifespan of adrenaline and norepinephrine released previously due to the rest of the substances contained in Arsyn.

Hordenine - It works very linearly, gently stimulating through the release of norepinephrine. It has a stimulating effect on the body in terms of physical and psychoactive. Alkaloid has anti-inflammatory action, blocks the action of bacteria from the group of penicillin-resistant staphylococci.

Cayenne Pepper Powder - one of the strongest natural thermogenics, which stimulates fat burning and facilitates the fight with unnecessary kilograms. The cayenne pepper can be an effective support in the fight for your dream figure. It reduces appetite, thanks to which it allows you to limit the calories you consume with food in a natural way. It has anti-inflammatory and analgesic effects, so it can be used to relieve discomfort of the osteoarticular system.

Grapefruit Extract (naringenine) - it works thermogenic and together with caffeine activates fat metabolism, leading to the reduction of their subcutaneous stores and increasing the amount of useful energy. Scientific research has shown that the administration of grapefruit extract along with caffeine as a result of specific metabolic interaction, increases the level of caffeine in the blood by up to 28% and prolongs its activity in the body by nearly 30%.

Huperzin serrata - an alkaloid with the ability to penetrate the blood-brain barrier, which is a negative catalyst for the degradation of acetylcholine, improving nerve conduction and having a significant impact on concentration, association and memory. It helps to alleviate the effects of oxygen stress, prevents depression and has neuroprotective properties that improve well-being. In sports supplementation recommended in the pre-workout period, pre-workout

2 capsules once a day in the morning. 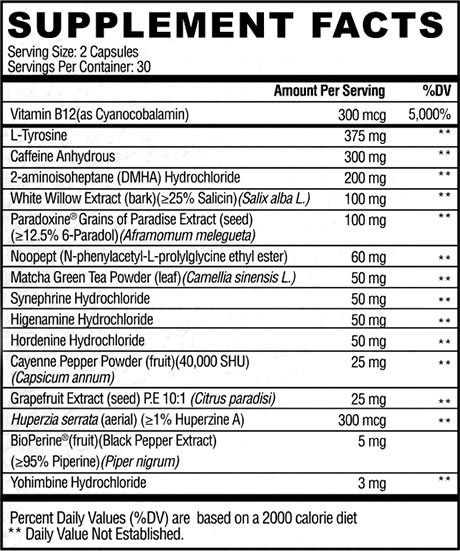