Ai-Dren Yamamoto Nutrition is a new dietary supplement with a high content of fiber and plant extracts. The plant components it contains contribute to the body's detoxification (dandelion, wakame) and drainage of body fluids (cranberry, cherry). Lespedeza contributes to the optimal functioning of the urinary system. In addition, rhubarb extract supports digestive functions. Yamamoto® Nutrition Ai-DREN® is one of the best products with a high dose of active ingredients. The supplement is recommended for athletes to detoxify the body, eliminate excess water and improve digestive function.

Fibers- soluble and insoluble fiber fraction. It improves digestion and proper bowel function. Studies show that acacia fibers can help reduce body mass index (BMI) and body fat. Fiber plays a role in regulating blood sugar. Preliminary research suggests that it may help protect against some of the complications associated with diabetes.

Iodine - occurs naturally in large quantities only in fish, which is why most people are not sufficiently supplied with this element. Iodine is an extremely health-promoting trace element that is essential for the health of the body. Needed for the production of thyroid hormones known as triiodothyronine (T3) and thyroxine (T4). T3 and T4 have three or four iodine atoms, respectively.

Lespedeza capitata - the plant has a supporting effect on the urinary system and has a beneficial effect on the work of the kidneys. Supports their physiological function, regulates and facilitates urination. The plant has a mild diuretic effect and promotes the removal of nitrogenous end products from the body.

Wakame (fucoxanthin) - fucoxanthin is a carotenoid derived from seaweed. Scientific studies show that this substance has a significant impact on the reduction of fat located in white tissue. In a short time it allows you to quickly visualize the muscles and increase the aesthetics of the figure thanks to the ability to remove subcutaneous water. The plant provides a constant and stable weight loss without side effects such as excessive stimulation or mood swings. Fucoxanthin provides an innovative approach to slimming, especially around the abdomen. Burning fat in this area is extremely difficult. A group of Japanese scientists have found that fucoxanthin accelerates fat burning in this sensitive area.

Rhubarb-has slightly laxative properties. Is a source of rapontigenin. It's a polyphenol that reduces the rate of cancer cell division. Rhubarb is a source of fiber, thanks to which it regulates digestion. In addition, it works anti-allergic, antioxidant and supports the cardiovascular system.

Cranberry-contributes significantly to maintaining the proper functioning of women's urinary tract. Cranberry proanthocyanidins are powerful antioxidants that protect against urinary tract infection and cystitis. The beneficial effect of cranberry is not only to increase the secretion of the benzoic acid metabolite hipuric acid but also reducing the adhesion of E. coli to the bladder epithelium by reducing their content in the urine, which effectively minimizes unpleasant disease effects in the form of abdominal pain or urinary urgency. Diuretic, it prevents urinary retention in the bladder by reducing bacterial growth.

Dandelion-is a very strong diuretic (dehydrating substance). This is the most powerful herb that helps get rid of subcutaneous water. In addition, it is attributed to detoxifying and cleansing properties, accelerates metabolism. Its root contains a lot of mineral salts, especially potassium, organic acids, sterols, inulin, and choline.

Bearberry- is a fruit belonging to the genus Arctostaphylos uva-ursi. The word uva-ursi means "bear's grape" because bears like this fruit very much. It is a low-growing shrub that can be found in Asia, Europe and Central and North America. The plant has detoxifying, analgesic and immunological protection properties. Effectively treats inflammation.

Green Tea- katechechins contained in green tea inhibit an enzyme called catechol O-methyltranferase or COMT, which actually breaks down the main fat burning hormone, norepinephrine. Because green tea is rich in catechins, it helps raise norepinephrine, keep it elevated, and prolong thermogenesis. It has also been shown that there is a synergistic interaction between caffeine in green tea and catechins (in particular EGCG) in green tea, which increases the body's use of calories as energy. In addition, it was found that the combination of caffeine and EGCG in green tea significantly increases resting metabolic rate. 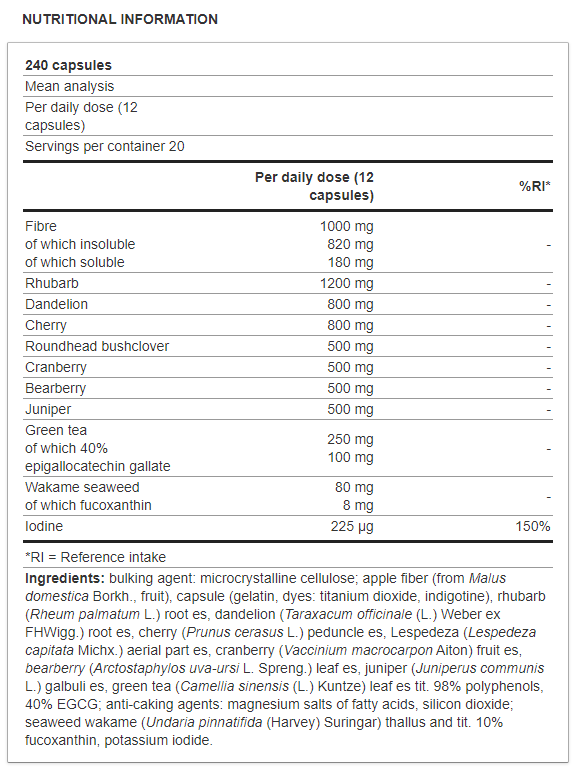