Haya Labs Agmatine Sulfate is a dietary supplement in capsules containing high quality agmatine sulphate. Its spectrum of action allows you to improve the quality of your workouts and muscle pumps and has a beneficial effect on the nervous system.

Agmatine - a neuroactive molecule produced in the body from arginine, through decarboxylation reaction. Particular interest arises due to actions blocking NMDA receptors and modulating the synthesis of nitric oxide. It is most often used as part of pre-workout supplementation and as support in the fight against addictions.

Nitric oxide and muscle pump
Nitric oxide, as a gas hormone, has a fairly wide impact on the body, but its effect varies depending on the place where it is made. The appropriate isoforms of the nitric oxide synthase enzyme, which converts arginine into NO, are active in various tissues.

Athletes value arginine mainly for the effective enhancement of the muscular pump feeling that results from the expansion of blood vessel lumen and the resulting more efficient influx of blood to the muscles. The form of the eNOS enzyme is responsible for the increase of nitric oxide in the blood vessels and its activity is intensified by agmatine.

The other two forms, nNOS and iNOS, are inhibited by it, which is also good news, because an excess of nitric oxide, for example in the nervous tissue, is definitely destructive.

Neuroprotective effect
Agmatine can also protect neurons through other mechanisms than the above-mentioned inhibition of neuronal nitric oxide. The most important neuroprotective mechanism is the inhibition of NMDA receptors. Excessive activation of these receptors by glutamate and / or other molecules threatens too much migration of calcium ions into the interior of neurons, which results in excitotoxicity, or cell death resulting from excessive arousal. Analogously, blocking these receptors protects us from destroying nerve cells.

Agmatine as a neurotransmitter
The glutamatergic system is not the only system on which agmatine works. The next system is the adrenergic system, specifically the alpha2 receptor subtype. The effect on these receptors is dose-dependent, because in small amounts agmatine is only a modulator and may increase the transmission of neurotransmitters binding to this receptor, while in larger amounts it becomes a competitive inhibitor.

What many people should be interested in, agmatine has a documented antidepressant effect. This is largely due to the effect on the action of serotonin, or the molecule of happiness. Agmatine does not increase the concentration of serotonin in synapses, but it affects the activity of some of its receptors, particularly the 5-HT-2 subtypes.

Activation of imidazoline receptors, in turn, causes an increased release of beta-endorphins, which are natural factors that reduce pain and improve well-being in an euphoric way.

Improvement of sensitivity to stimulants
The use of agmatine is a popular practice in order not only to slower build tolerance to stimulants but also to restore sensitivity to their effects. This is particularly beneficial information for people who complain about the poor effects of caffeine and other stimulants.

This activity is also confirmed in scientific studies in which the effect of NMDA inhibitors on the building of tolerance to the action of cocaine and amphetamine, as well as various other psychoactive substances, not only stimulants, was checked.

Pain reduction
One of the factors that reduce the perception of pain is the aforementioned increase in beta-endorphin, resulting from the activation of imidazoline receptors. Effects on the same receptors result in enhanced transmission in CB1 receptors of the cannabinoid system, therefore agmatine may potentiate the anelangetic effect of marijuana and endocannabinoid enhancers.

Due to nNOS inhibition and NMDA inhibition, agmatine not only increases the effect of opioid drugs, such as morphine and fentanyl, but also slows down their performance due to rapidly built tolerance. Thanks to this, it is possible to use smaller doses and protect health against the harmful effects of this type of drugs. Agmatine is also effective in reducing neuropathic pain alone.

Agmatine is recommended for athletes looking for an effective way to increase blood circulation and nourish the muscles in training. It also works well in the prevention of fast-growing tolerance to stimulants. It can also be used by people struggling with depressive symptoms. 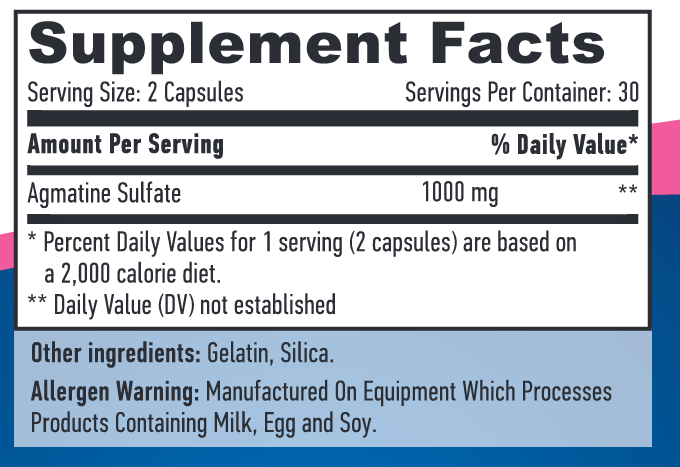 Users reviews
Number of reviews: 2 Average score: 5.00
Score:
Author: James, Ispra
all good
Score:
Author: Cristiano, ALCABIDECHE
Does the job, good brand.
To rate this product or to add a new review, you need to log in.
Recommended