1 Up Nutrition 1 Up Pre Workout is a new, comprehensive pre-workout designed to maximize energy, focus and endurance. Contains a set of ingredients with stimulating, nootropic and pumping effects. Perfectly intensifies the feeling of muscle pump for hours after training.

Vitamin B3 - vitamin plays important roles in the body - it is necessary, among others, for the proper functioning of the brain and the peripheral nervous system. In addition, nicotinic acid is involved in the synthesis of sex hormones, cortisol, thyroxine and insulin.

Citrulline Malate - participates in the synthesis of nitric oxide (NO) and phosphocreatine and oxygen metabolism of glucose, thereby increasing the uptake of oxygen, glucose, amino acids and creatine and energy production through muscle cells. It reduces the concentration of lactic acid and ammonia in the muscles, thanks to which it allows the body to recover energy faster by increasing the level of creatine phosphate and ATP resynthesis.

Carnosyn - belongs to the organic chemical compounds from the group of amino acids. This is a patented, highly bioavailable version of beta-alanine. It is necessary for the production of carnosine and protein building blocks that help prevent aging. The compound supports the proper functioning and development of muscles. The amino acid is known to reduce muscle fatigue, which can help your muscles work better during training. This in turn promotes muscle growth.

AGmass - is a highly pure and natural source of agmatine produced by modern fermentation methods. Agmatine effectively increases the secretion of nitric oxide in the human body, which translates into a strong feeling of muscle pump during training. The expansion of blood vessels supports the supply of blood and nutrients to working muscles, which significantly accelerates the regeneration process and builds new muscle fibers. In studies with the use of agmatine, it has been shown that its action can support protein synthesis even twice, which, in addition to the action of agmatine itself, is also associated with the action of increasing the supply of nutrients to muscle tissues.

L-Tyrosine - has a positive effect on memory and concentration, and improves the fat burning process. The supplement increases motivation, endurance and stress resistance in intensely training athletes. In addition, the product accelerates metabolism, while increasing energy production from adipose tissue.

Caffeine Complex - a set of three forms of caffeine has a thermogenic effect and suppresses appetite due to increased production of adrenaline and noradrenaline. It has been proven to increase the formation of such neurotransmitters in the central nervous system as dopamine, acetylcholine or even serotonin, which exerts a stimulating effect and increases cognitive function. The overall effect of caffeine on the body allows you to maintain the effectiveness of training and a positive mood, despite the calorie deficit.

Eria Jarensis Extract - acts as a neuromodulator on the central nervous system, giving many benefits to cognitive functions. Provides mood-enhancing effects by increasing dopamine and nor-adrenaline levels in the body. Dopamine is responsible for increasing the feeling of well-being, and therefore the extract from Eria Jarensis provides a euphoric effect, while reducing anxiety. Dopamine and noradrenaline are also associated with increased mental alertness and concentration. It has an effect similar to DMAA - provides agitation, great concentration, alertness and euphoria.

L-Theanine - is a non-protein amino acid found naturally in green tea leaves - camellia. Has psychoactive properties because it easily overcomes the blood-brain barrier. It stabilizes the mood, calms down, reduces the symptoms of stress and anxiety. Also used as a nootropic agent - improving cognitive functions, work efficiency and learning effectiveness.

DMAE - an intermediate in endogenous choline synthesis structurally similar to it. In small amounts, it is found in the brain. It is a more effective precursor to acetylcholine than choline itself, because when delivered from the outside it crosses the blood-brain barrier more efficiently. It belongs to nootropic substances and drugs stimulating the central nervous system (CNS), but its stimulant properties are quite mild. Increases acetylcholine synthesis, improving neuronal transmission in the cholinergic system.

Higenamine - affects the production of nitric acid. Nitric acid affects the release of hormones and adrenaline. It is also certain that the product accelerates the regeneration time of the body, and also increases the amount of blood flowing, and thus the amount of nutrients supplied to the muscles is much greater.

Hordenine - this ingredient works primarily by releasing and protecting norepinephrine, which translates into increased metabolism, energy supply, and a decrease in appetite. Athletes use Hordenine for three main profits: fat reduction, appetite control and energy boost. The compound used by bodybuilders before training, for synergistic effects is combined with PEA (phenylethylamine).

N-Methyl Tyramine HCL - a compound extracted from bitter orange or barley fruit. N-methyl-tryamine (NMT) is formed by adding the "methyl" group to the well-known biogenic amine, L-Tyramine. No, this is not a synthetic ingredient. Plants can actually produce NMT using the tyramine N-methyltransferase enzyme. Extracting NMT from plants is cheaper than synthetic NMT. Its action is based on the stimulation of beta receptors, which play a significant role in the fat burning process. In addition, the compound exerts an anabolic effect, increases blood flow to muscles and increases cell efficiency in glucose burning.

Rauwolfia Vomitoria Extract - has antioxidant, anti-inflammatory and analgesic properties, supporting carbohydrate-insulin metabolism, counteracting cancer processes and improving mental condition. High standardization of the extract for rauwolscine, or alpha yohimbine or isojohimbine, focuses the product on the nervous system and the loss of unnecessary weight. By interfering with the cholinergic system, it increases the adrenaline concentration, stimulating the body to function and intensifying the lipolysis process. Strengthening fatty acid oxidation in mitochondria.

Mix 1 scoop with water 20 minutes before training. Start using the ½ measuring cup to test for tolerance to stimulants. Do not combine with other stimulants, a supplement recommended for use during the day, it is not recommended to use in the afternoon. 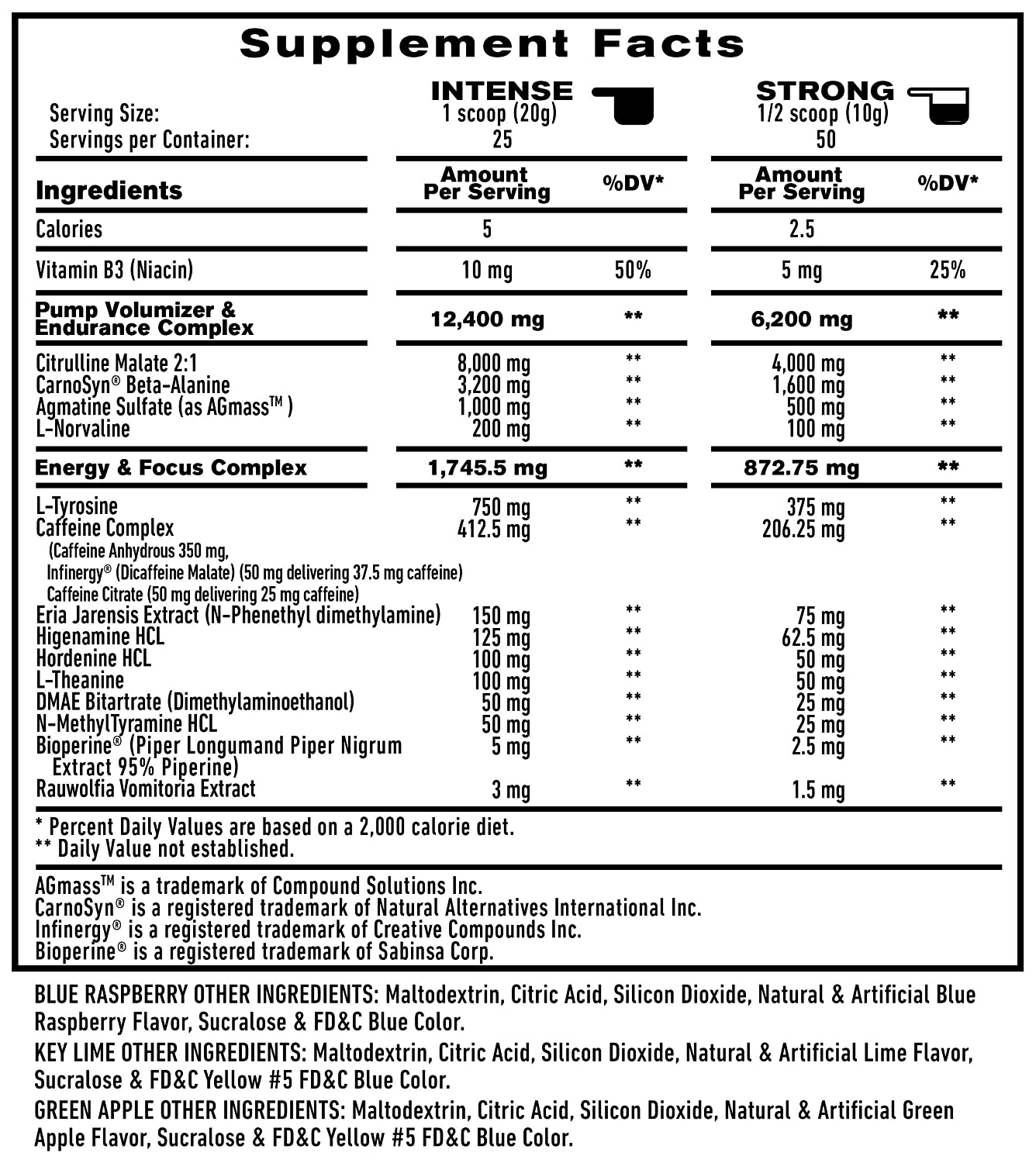