Try the new, advanced formula Rowdy guaranteeing the maximum use of time in the gym!

Freedom Formulations Rowdy Pre-Workout is a new incredibly effective pre-workout based on proven ingredients that will ensure that your training will be at the highest level. High-quality active substances perfectly increase training performance, provide extreme energy and accelerate fat loss.

Rowdy supplement is a combination of stimulating ingredients, sarms and nitric oxide boosters. DMHA, contained in the pre-workout supplement, perfectly improves concentration and training energy. The use of a pre-training booster ensures a long-lasting muscle pump and accelerates the building of lean muscle mass.

Rowdy Pre-Workout is rich in active ingredients, including:

DMHA - a strong ingredient belonging to stimulants with an effect similar to that of geraniums. It has an excellent effect on the central nervous system, increasing the level of neurotransmitters: dopamine and noradrenaline. Intensive workouts combined with the use of DMHA give phenomenal results in the form of suppressing appetite, reducing body fat, increasing memory and creativity, and reducing anxiety by preventing fatigue. The preparation is an excellent alternative for people who are delighted with the effects of DMAA, but show poor tolerance to this stimulant. The chemical structure of DMHA and DMAA is very similar, therefore their action is similar.

GW 501506 - increases the sensitivity of muscle cells to insulin, thanks to which we achieve a full figure, beaten, hard muscles with a great definition, while constantly reducing the level of fat in the body. This leads to effective body composition recomposition and instant visual effects. An important aspect is also the fact that due to the increased consumption of pestle tissue, the proteins from which the muscles are built remain intact, therefore catabolism practically does not occur. It owes its effectiveness to exceptionally wide and multidirectional mechanisms of action. It is a PPAR-Beta modulator, activates protein kinase and improves glucose absorption by skeletal muscles, which directly contributes to the use of fats as a source of energy.

SR 9009 - is an agent based on the activity mimetic stimulating REV-ERB receptors, which improves the metabolic processes in the body and increases energy expenditure, enhancing the effectiveness of the reduction period. Its ability to intensify the transformation of energy substrates into energy allows you to increase the efficiency and endurance of the body, and thus the development of training possibilities, especially in endurance sports. Due to the properties that improve the regeneration of the system, with the appropriate use of the product, people who train strength sports can also benefit from taking it. In addition, by increasing the number of mitochondria, improving the transformation of energy compounds and reducing the level of insulin resistance, it improves exercise capacity, increases endurance and improves the regeneration of the body after training.

Citrulline Malate - participates in the synthesis of nitric oxide (NO) and phosphocreatine and the oxygen metabolism of glucose, thereby increasing the uptake of oxygen, glucose, amino acids and creatine and energy production by muscle cells. It reduces the concentration of lactic acid and ammonia in the muscles, allowing the body to recover energy faster by increasing the level of creatine phosphate and re-synthesizing ATP. Citrulline malate is a much more effective form than high doses of arginine, as it is its precursor. At the same dose as arginine, it is more effective in increasing its amount in the body than arginine alone.

Yohimbine HCL - a substance contained in the Rowdy pre-workout, which is helpful in the fight against the so-called. resistant adipose tissue, located mainly in the thorax and lower waist areas in men, and hips, buttocks and thighs in women. Yohimbine works by blocking α2-type receptors, which clearly facilitates slimming and is helpful in sculpting body parts resistant to slimming. It is worth remembering that the action of yohimbine is effectively eliminated by insulin. So taking this compound around carbohydrate meals is pointless. Yohimbine is especially effective when used on an empty stomach, before exercise.

Beta Alanine - is essential for the production of carnosine and the building blocks of proteins that help prevent aging. The compound supports the proper functioning and development of muscles. The amino acid is known to reduce muscle fatigue, which can help your muscles work better during training. This, in turn, promotes muscle growth. Beta-Alanine is especially helpful in intense short-term workouts such as weight lifting. Some people taking beta-alanine may notice a slight tingling sensation known as paraesthesia. The tingling occurs because beta-alanine dilates the blood vessels, allowing more oxygen and blood to be delivered to the muscles.

Creatine HCL - pure creatine hydrochloride without any unnecessary flavors, dyes or preservatives. It is a highly efficient form of creatine that contributes to the increase in physical performance, strength and muscle mass. Recommended for athletes and active people looking for an effective creatine supplement in the period of building their peak condition, which can be used even immediately before the competition because it does not cause subcutaneous water retention.

Caffeine - has a thermogenic effect and suppresses appetite due to the increase in the production of adrenaline and norepinephrine. It has been proven that it causes an increase in the formation of such neurotransmitters in the central nervous system as dopamine, acetylcholine or even serotonin, which exerts a stimulating effect and increases cognitive functions. The overall effect of caffeine on the body allows you to maintain the effectiveness of training and a positive mood, despite the caloric deficit. 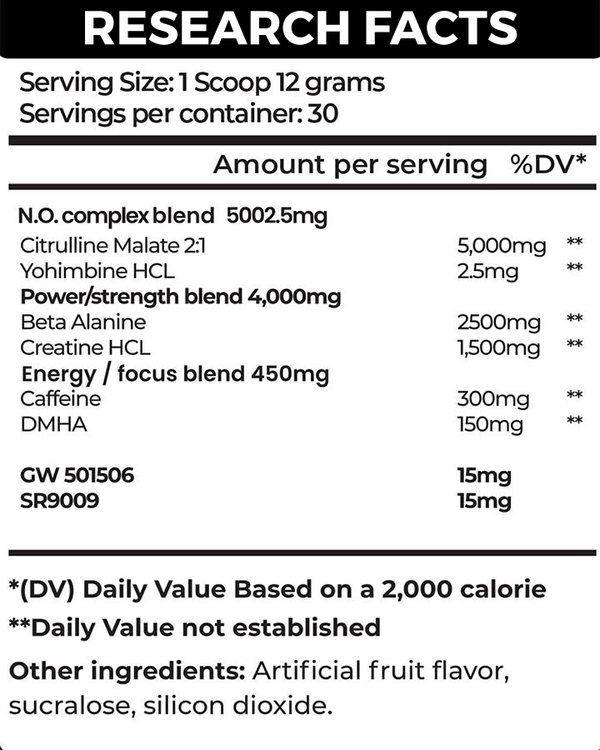