Master Blaster Bang is a supplement that ensures maximum vasodilation, transporting more nutrients to the muscles for optimal growth. By increasing the flow of blood to the muscles, the Bang Master Blaster supplement both builds additional satisfaction from the muscle pump that creates the muscle and maximizes muscle nourishment after training. The preparation perfectly reduces the feeling of fatigue and pain, allows for effective performance of long and intense workouts.

7.5 grams of BCAAs for fast muscle growth and endurance

2.4 grams of beta-alanine to increase endurance, strength and regeneration

350 milligrams of anhydrous caffeine to promote alertness and concentration

RS5 - Hydroxypropyl Starch Phosphate is a modified sugar. Isolated from corn and wheat starch granules by reaction with propylene and phosphoric acid. It is an easily digestible source of carbohydrates, providing energy to the muscles.

Highly Branched Cyclic Dextrin - dextrose is a simple sugar intended for people practicing both strength and endurance sports. By reducing the activity of water, it has a preservative effect and also reduces the process of protein denaturation. The right amount of dextrose is beneficial in the post-training phase because it is responsible for the transport of nutrients to the muscle cells.

L-Isoleucine - the supply of large amounts of leucine reduces the level of the other two amino acids: Isoleucine and Valine, so it is important to use all three compounds together. In addition, Isoleucine is classified as glucogenic amino acids, i.e. those that the body can easily and quickly transform into energy necessary for its functioning. This means that we will not only be able to train longer and more intensively, but also recover faster.

L-Valine - its presence in this combination, owes not only to the aforementioned need to administer all three BCAA amino acids together, but also to reducing central nervous system fatigue. In addition, as in the case of the other two amino acids, it is easily converted into energy used by working muscles and thus allows you to save the glycogen stores stored in the liver.

L-Lysine - it must be obtained from food because our body is unable to synthesize it. It shows antioxidant properties (destroys free radicals) and thus helps to fight diseases, helps to raise the level of growth hormone, present in the construction of collagen, facilitates the absorption of calcium and improves mental concentration.

L-Threonine - has a very wide spectrum of activity and affects the body comprehensively. One of its valuable properties is its influence on the condition of the skin. Threonine ensures proper skin hydration and prevents dehydration.

L-Histidine - Histidine is an essential amino acid. Plays an important role in the production of proteins. Takes part in the production of hemoglobin. It is an effective transporter of many key elements, e.g. zinc and iron. These micronutrients are one of the essential ingredients for the proper functioning of not only the heart and metabolism. Deficiencies of this amino acid are often associated with a low content of these metals, which in turn is reflected in the body's hormonal imbalance.

L-Methionine - is an essential ingredient for the synthesis of glutathione, one of the most important compounds in the context of protecting the body against free radicals and toxins. It seems that taking methionine simultaneously with paracetamol (or other drugs from this group) may have a protective effect on the liver and kidneys, preventing them from being damaged. It is sometimes used in cases of poisoning with hepatoxic drugs, alcohol and ammonia. Supports the natural regeneration processes of connective tissue, skin, hair and nails. Often used to relieve the symptoms of acne.

L-Tryptophan- is an amino acid that is necessary for the production of the sleep hormone, and also responds to the production of serotonin and melatonin. L-tryptophan is also involved in the production of proteins in the human body, e.g. muscles. Since it cannot be produced by our body, it has to be delivered to the body from the outside.

Citrulline Malate - participates in the synthesis of nitric oxide (NO) and phosphocreatine and the oxygen metabolism of glucose, thereby increasing the uptake of oxygen, glucose, amino acids and creatine and energy production through muscle cells. It reduces the concentration of lactic acid and ammonia in the muscles, allowing the body to recover energy faster by increasing the level of creatine phosphate and re-synthesizing ATP. Citrulline malate is a much more effective form than high doses of arginine, as it is its precursor. At the same dose as arginine, it is more effective in increasing its amount in the body than arginine alone.

L-Citrulline - participates in the synthesis of nitric oxide (NO) and phosphocreatine and the oxygen metabolism of glucose, thus increasing the uptake of oxygen, glucose, amino acids and creatine and energy production by muscle cells. It reduces the concentration of lactic acid and ammonia in the muscles, allowing the body to recover energy faster by increasing the level of creatine phosphate and re-synthesizing ATP. Citrulline malate is a much more effective form than high doses of arginine, as it is its precursor. At the same dose as arginine, it is more effective in increasing its amount in the body than arginine alone.

Betaine Anhydrous - it helps to increase the body's efficiency and improve the work of the nervous system. An additional advantage associated with the use of betaine is better cell hydration. Like glycine, betaine draws water with it when absorbed into the cell. This results in better hydration of the body and an increase in the feeling of a muscle pump during training. The main intracellular transporter of trimethylglycine in the body is the BGT-1 transporter. In addition, betaine stimulates the production of the vasodilator - nitric oxide. In general, the ingredient provides better blood supply to the muscles and their nutrition.

Beta-Alanine - is essential for the production of carnosine and protein building blocks that help prevent aging. The compound supports the proper functioning and development of muscles. The amino acid is known to reduce muscle fatigue, which can help your muscles work better during training. This, in turn, promotes muscle growth. Beta-Alanine is especially helpful in intense short-term workouts such as weightlifting. Some people taking beta-alanine may notice a slight tingling sensation known as paraesthesia. The tingling occurs because beta-alanine dilates the blood vessels, allowing more oxygen and blood to be delivered to the muscles. 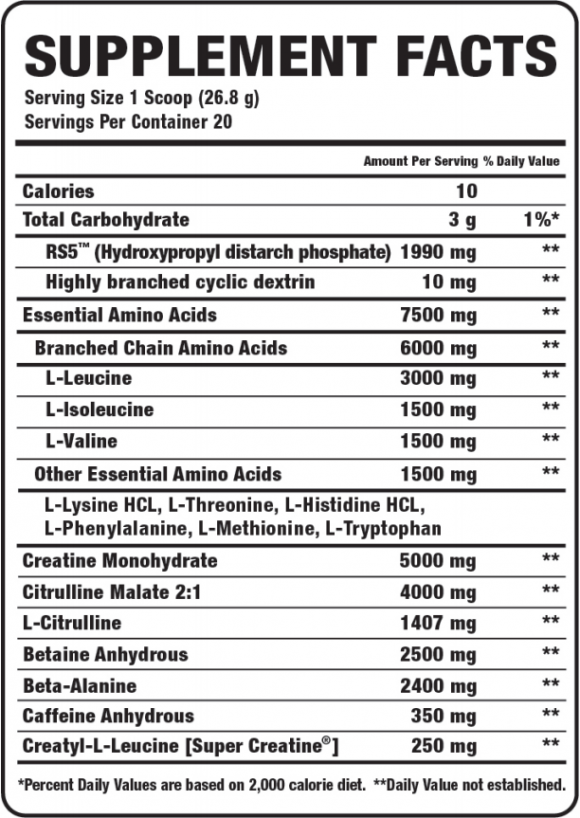